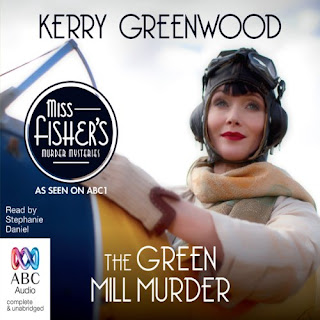 My self-isolation reading has pinball all over the place the past few weeks. But the audiobooks I’ve requested from my library has been very hit and miss. I would request an audiobook WEEKS ago/before self-isolation, excited to audiobook it, only for it to come available to me now during these crazy times and my brain going “Nope!” over it.

But my brain allowed me to listen and enjoy The Green Mill Murder, the fifth book in the Phryne Fisher series and my third outing (after Murder on the Ballarat Train and Flying Too High).

Phryne Fisher is dancing to jazz at the Green Mill in 1920s Melbourne, when a man collapses to the floor, stabbed in the chest. But no one was near the man so how was he stabbed?

When the Police arrive at the Green Mill, Phryne’s dance partner goes to bathroom to be ill, and vanishes without a trace…

Soon, Phryne is investigating the case of the dead man and her dance partner’s disappearance and the trouble he left in his wake…


There’s not much to say about this. If you have read my previous two write-ups of Phryne Fisher audiobooks, these are very much cosy Australian murder mystery, which makes reading/listening to this story at the moment so lovely and comforting, very much put it on and listen to Phryne while playing Animal Crossing while being furlough. There are things that I do like. Even though this story is set in 1920s Australia, it does have a modern feel to it. The books so far tackle sexism, sexuality, domestic abuse (emotional, in this book’s case) racism and gay rights in a modern way, and that is due to how Phryne see the world. She has no issues with people being gay or calling our the double standards of sexism. If you took her out of the books and set her in 2020, I think her character would thrive and carry on without much trouble.

However, there is one or two things that don’t sit well. There are some characters that fit certain stereotypes and you go “Really? That’s what you’re going to do with them? That feels a tad lazy”. Plus, some of you guys might find Phryne a tad grating. I warm to her the more I listen to these stories, but I remember trying to audiobook her first novel, Cocaine Blues, and I DNFed it before I got to the end of chapter 3.

At the moment, this is an easy, light murder mystery. Something I could switch my brain off to during these unsettling times. I am going to do another Phryne Fisher mystery later in the year, but not decided which. But I do get that some people will not warm to book Phryne and I think the TV series (which is on Alibi and Netflix in UK) might be a better fit.
Posted by Pewter Wolf at 08:00:00