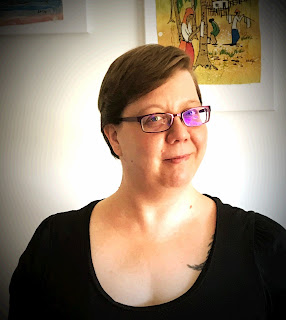 You thought I was going to take today off, weren't you? Well, nope. Not today, for I am welcoming author Mel Gough onto the Pewter Wolf for a tiny Q&A (Four questions. Yes, that's how quick it is!)
Mel Gough is the author of several romances (which usually have a dead body in, for good measure). Her latest, A Leap of Faith, is published by Red Dog Press and is a little different from what I normally talk about or read on here.
Set in South Africa in the early 1950s, Father Daniel Blakemore is happy with his missionary secondment in small, rural hospital on the Eastern Coast. Being away from England makes it easier to hide this homosexuality - a secret that would destroy everything if it ever comes out.
So when Doctor Eddie Raleigh starts working the same hospital, the two men are instantly drawn to each other and their liaison represents both Daniel's deepest desire and his worst nightmare. If this ever comes to light, it could ruin everything.
And with the emergences of the apartheid in South Africa and the criminal nature of homosexuality in the UK, how are the two men going to survive: in love, fear or duty?
I am thrilled that, when I did a twitter query about "Should I randomly email some MM romance authors to see if they want to be on the blog?" that both Mel herself and Red Dog Press jumped at me and went "Yes!" and, after a mini chat, Mel had kindly offered to be involved in a small Q&A. So, to Mel, thank you for spending time writing this post out. I know you must be busy, and thank you to whoever is in charge of Red Dog Press's Twitter (@RedDogTweets) for pushing us together.
Oh, before I hand you over to Mel, let me point you into her social media home. If you want to check out her website, you can visit at melgough.com, or if you want to tweet her and say hi, you can at @melgough_writer. She can, also, be found on Facebook and Instagram.
Now, ONTO THE QUESTIONS!
Tell us about yourself and your writing.
Thank you so much for hosting me today! Since 2017, I have written eight novels and novellas primarily in the M/M romance genre, and one Reverse Harem novel, which is also a murder mystery. My latest book came out in February this year with Red Dog Press, which I’m really excited about. And I have something new planned for later in the year: A dystopian F/F crime thriller set in London, set during a lockdown. I wrote that book during the first Covid-19 lockdown in 2020 and found it quite therapeutic.

Tell us a little bit about your writing process. How do you choose your stories, and what gets you motivated to sit down and get it down on paper?
I’ve always been a very wide reader and I have many genres that I will try. In some, I only like one or two authors (like, I’ll only really read horror novels by Stephen King) and in other areas I’ll read very widely.

My favourite genres are probably apocalyptic/dystopian sci fi and crime, closely followed by romance. I like romance best when it’s a part of a bigger story, that’s probably also quite apparent in my romance novels. I try to mix in bigger themes, which I find is especially rewarding in historical novels.

The way I go about my books is usually that I have the idea for a scene, or a bit of dialogue, which will then percolate for a few days or weeks. Then I write down everything I know about the story, and start an outline. The extent of the outline, and how closely I stick to it, depends on the book. Sometimes I’m almost a pantser, and sometimes I write the synopsis before I write the book.

My writing routine is fairly simple: I speed write for between 15 and 45 minutes a day, in chunks of 15-18 minutes. I set a timer, which counts down, and then I write as fast as I can until the timer stops. I can do between 400 and 600 words in 15 minutes. The idea is not to think too much while downloading those words. The editing comes later; in those sprints I just let the creative brain flow. This has been working really well, I’m a lot more efficient now, and there’s a lot less procrastination. Recently I’ve started listening to writing music on YouTube during my sprints, with headphones, and that’s ratcheted up my focus another notch.

I edit very extensively, which I guess makes sense because when writing fast a lot of focus is on getting the story down and not so much on making it sound nice. I also do much of the research during editing (but I also research during the first draft, for which I stop the timer). 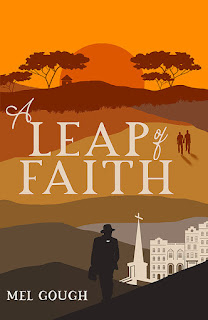 Tell us about your next book.
I’m planning to publish my next book this autumn. As I said, I wrote it during the pandemic lockdown last year, and it really helped me cope. It’s about a pandemic and it’s set in London, but it’s not about Covid-19. I’m one of those weird people who like to really lean into bleak stories when life is difficult. When my dad died, The Walking Dead had just started airing and I got really obsessed with it.

So, while I know that a pandemic book won’t be everyone’s cup of tea right now, I know I’m not alone with this coping mechanism. The story is also a murder mystery, and there’s an FF love story, which is a first for me for a novel. (I’ve already written a dystopian FF short, which can be found on my website - https://www.melgough.com/obliviscatur.html) The book is coming out under a new pen name, and as soon as I have more details I’ll announce them via my social media, so stay tuned!

Many of your characters are LGBT+. Do you feel that diversity in fiction is important?
I definitely do. I like that by being an author I can do something for the visibility of the LGBTQ+ community. It’s been an important part of my life, and I love how the internet has enabled so many of us to come together and support each other all over the world. When I was young, I would’ve loved to have access to more books where I felt represented. So now, I try to write books like that.

I especially love stories where being queer is not the only thing that’s going on for my characters. It’s a facet of a complex life where the focus of the story is on solving a murder, or on something else going on in the wider world. Queer people have lives and I love that there are so many stories now told about those lives. I do also appreciate a sexy love story, though.
Posted by Pewter Wolf at 08:00:00