I apologise for squeezing these two books together in one big review and a few weeks after I read them as new real life things are happening so I decided to put them together. Both are romance, both are fun and both had little issues here and there so, to save time, I decide to put them together so real life might not be calm at the time you all are reading this, dear reader, so bear with me for the next few weeks so things might be a little up in the air and the ideas I’m thinking over might take a little longer to write than normal…

So, where to start? 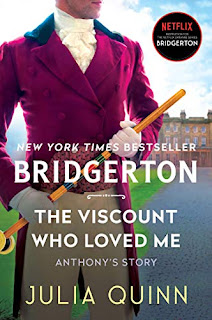 Title And Author: The Viscount Who Loved Me by Julia Quinn
Publisher: Avon

In this, the second book in the Bridgerton series, this follows the eldest Bridgerton sibling, Anthony, who hasn’t just decided to marry - he’s even chosen the perfect wife: someone pretty, kind, a good mother and someone who he won’t fall in love with. The only thing standing in his way is Kate Sheffield, the older sister of his future wife, who is determined to stop this coupling at all cost. To her, reformed rakes don’t make the best husbands and Anthony Bridgerton is the worst. So, why is it the two keep getting pulled together?

This was fun (like I said in first paragraph!). There’s no way to get round it: this series seems to be one of those series that you read, knowing what you are going to get and you just enjoy the ride. You’re going to get sexual tension, humour, kissing and all the enemies to lovers growth (though the turning point - aka The Mallet of Death - did happen very quickly for both characters). And yes, some of the troupes used in romance are here (enemies to lovers, forced marriage because SCANDAL) but there was something about this coupling that I really liked and was happy to see. I think they snipping at each other and their humour made this move nicely (reading this did take longer than I normally would like)

Ok, before I go further, I want to address something super quick as this moment if the first book in the Bridgerton series, The Duke and I, weights on some people’s minds over whether to continue with series or not. In Duke, we have has a moment that has split the fans of the series over one very sketchy moment (Chapter 18) due to dubious consent and many readers were worried that the author’s handling of toxic scenes. Luckily, this does have less toxicity and it does handle mental health such as grief and trauma quite well (it did feel a tad rushed at the end, though). But there are a few things some readers might go “Oh, not sure about that” over, which its understandable due to this book being written over 20-odd years ago and the time-frame of when this book was set.

I do have more to say, but writing this quite late one night so let me move onto the second book in this mini-review wrap up. 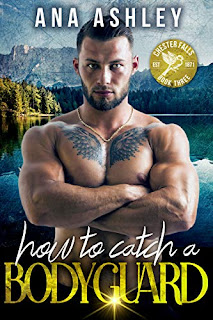 Title And Author: How To Catch A Bodyguard by Ana Ashley

Book three in the Chester Falls series (of course I skipped book 2, How To Catch A Rival, which might have been a mistake as that couple had strong friendships with one of the leads. So, I might need to backtrack) where we fall Connor and James. Connor is older brother of the first book’s love interest, Charlie, and James is head bodyguard to Charlie’s love interest, Prince Kris (oh yeah, book one was a royal MM romance). But James and Connor knew each other 15 years ago when, the last time they met, James kiss Connor, only for Connor to run away and James to suddenly and unexpectedly move away.

But with his brother and his boss dating, Connor and James have slowly rebuilt their friendship. Until Connor discover his home has been broken into and the fear that he might be stalked. James thinks it’s best that he stays with Connor, but he never got over his crush for Connor, things mights get a little complicated.

Ok, this was also fun as heck like How To Catch A Prince (where we met both Connor and James and it was VERY OBVIOUS that these two had history). I think I read someone say this feels like a Hallmark Movie: very sweet and sugary (most of you will find that a tad sickly). I think what works differently is that while Prince was very romance heavy, this had an edge of suspense alongside the second chance, friends to lovers, possible gay/bi for you (a troupe I’m not always the biggest fan of, if we’re being completely honest) story.

I’m not exactly certain about the whole stalker resolution. It was wrapped up a little too quickly for my taste and, after the levels this person went to (burning down Connor’s house at the half way mark), you expect a bigger punishment/payoff!

Yes, this is candy floss and yes, some of you will hate this (no real angst in this series) but it’s fun. And we all need to read fun from time to time. And I have one more full story and one (Christmas-ish) novella in this series to go and I am not going to apologise for reading these, because they make me happy (and after the year/18 months we’ve had, a little happiness is always needed).

So yes, these were fun. Not my typical reads (you guys knows me, YA fantasy and YA crime/thrillers are my typical reading jam), but I am hugely enjoying my dive into romance. Not sure if my reading plan of romance reading this August will keep going, but am having fun so not going to ruin/jinx self!

Because September and October… oh boy, they are going to take a turn reading wise, I sense. Who’s ready for a murder or two next month?

Email ThisBlogThis!Share to TwitterShare to FacebookShare to Pinterest
Labels: Ana Ashley, Bridgerton, Chester Falls, GoodRead, How To Catch A Bodyguard, How To Catch A..., Julia Quinn, Kindle, reading, review, Summer of Love 2021, The Viscount Who Loved Me