This Extract Will Leave You Undone 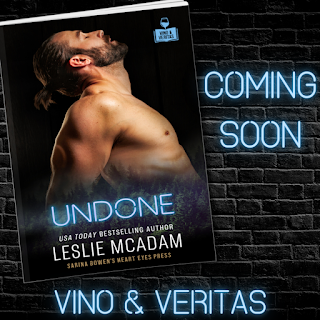 I have an extract for you guys! And you might recognised the title as the author popped on the Pewter Wolf Reads a month ago.
Undone by Leslie McAdams is one of the five new titles coming out next week as part of Vino and Veritas, one of the spin off series in Sarina Bowen's World of True North.
Undone follows Jason, who thinks his new roommate, Murph, has awful taste in men. Murph is funny, full of life, special. Even a straight guy like Jason can see that.
But Murph's dates... well... Jason yelled at one, kicked another out of the apartment and threw beer in a third's face. And he has no idea why he's reacting the way that he is.
Jason's sister joked that maybe it's because he's jealous. Which is ridiculous... right?
Now, Leslie McAdams came on the blog last month and chatted about how she came about to write Undone and her involvement in the series (link to that post is here, FYI). So, I am thrilled to have a tiny extract from Undone to share with you after chatting with Leslie and her going "Oh, do you want to read a sneak peek and share with your readers?" (er... yeah! I devoured this literally before I ran to work that morning!)! This little titbit is from Murph's point of view, as Undone is told in dual narrative: Murph's and Jason's.
Now, before I give you the extract to devour, if you want to know more info on Undone or any other titles within the Vino and Veritas series (as well as the other series in The World of True North), check out hearteyespress.com. And, if you want to check out Leslie's other works, you can visit her on her online home at lesliemcadamauthor.com or you can tweet her a quick hello at @LeslieMcAdam. And I want to thank Leslie for being so lovely and kind as I emailed and we chatted book recs! Always on the hunt for a good read!
Now, if that all out of the way, here is Undone's extract for you guys! 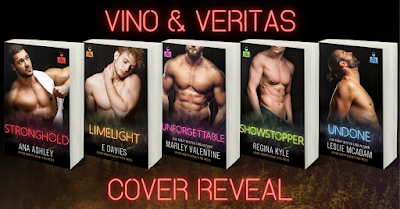 But the boundaries are drawn. I know my place. That’s fine.

Okay, it’s really not, but what choice do I have?

I’m lounging on the couch, about to get ready for my date with London, when Jason walks in.

Goddess, he looks amazing. His nicely tailored dark gray suit hugs his biceps and curves along his behind. He’s undone his tie, and his heavy scruff darkens his jaw.

He chuckles. “Hey, Murph. Have a good day?” He shrugs out of his jacket, placing it on the back of a chair, and slides off his tie.

There’s something yummy about a guy taking off a tie. Then he unbuttons his top button and rolls up his sleeves, and all the blood rushes from my face down south. “Yes,” I squeak. Then I clear my throat. Tamp down your Jason kink, Murph. “Busy at work, and some new marketing ideas coming up that I might get to help design.”

“You designing for the wine bar?” His green eyes catch mine, and he smiles.

This is not good. Jason has a force field that catches me in its tractor beam. Maybe he’s in some other alternate reality that draws me in. I must resist his luscious face.

So I focus on my phone and nod fiercely. “Yeah. It’ll soon be fall, and that’s time for mulled wine. Hot grape juice.”

He snorts. “Is that what you call it?”

“Only when I’m disrespecting it. But it’s there for me in the morning.”

Again, he laughs, and it makes me so happy to make him happy.

He settles down in the chair opposite mine, then throws his head back in relaxation. I watch him for a second.

“Want to go to the farmers market tomorrow?” he asks.

“I don’t know. I might be out late tonight.”

It’s my imagination that he looks disappointed, right? It has to be. My mind’s playing tricks on me. “London. The guy who sent me the … nude art earlier this week.”

“Where are you going?” Jason asks. Then his face falls. “Sorry. That sounded like a dad or something. I just wanted to make sure …” He fidgets in his seat. Then he tries again. “Just always wanna make sure you’re okay.”

“Aww, buddy,” I coo, fluttering my eyelashes. “You care about what happens to me?”

Jason’s frown deepens, if that were possible. Which, I guess it is possible, since I’m looking at it. “Yeah, I do. Where are you going?”

“Speakeasy. I have to leave in less than an hour. Time to go spruce up.”

I glide out of the room as Jason sits back and stares at me.