A Cast of Falcons Extract 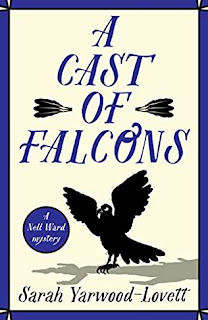 I have an extract for you all! And it happened on sheer impulse - and by that, I mean, after finishing Sarah Yarwood-Lovett's A Murder of Crows and discovering that I needed to know what happens next (that took me by surprise, truth be told), I (impulsively) emailed the publisher - Embla Books - and went "I want to do something to get everyone excited for the next book in the Dr Nell Ward series, A Cast of Falcons, as I need to know what's going to happen next to these characters". Next time I know, I got a reply going "Fancy sharing a small extract from A Cast of Falcons?"
And here we are! So, before I share a tiny sneak peek of A Cast of Falcons, let me tell you what this is about.
When her oldest friend announces that she's impulsively engaged to the almost too good to be true Hawke McAnstruther, Dr Nell Ward rashly offers to host the wedding at her family's estate of Finchmere. But if she thinks it's going to be a joyful event, she's in for a nasty shock when she discover's her friend's parent strong dislike of their soon-to-be son-in-law.
But before the ceremony is even over, Hawke's shady personal and professional lives begin to unravel and before the evening is out, a shocking murder takes place and the list of suspects is long. Nell finds herself investigating what happened at her home with her best friend, Rav, and PC James Clarke, desperate for the truth. But that might not be the only truth as Nell finds herself in the middle of a love triangle between Rav and James, and she's able to find out where her heart truly lives... if she lives long enough.
Now, this isn't out till next month (the 18th, if I remember right), but excited to read the chapter and share a snippet. Now, I could have share the first, dramatic page or something more romantic to wet your appetite... decisions, decisions...
Arthur held the gun to the side of his head, his hand shaking. Taking a deep, shuddering breath, he released the safety catch, his eyes screwed shut as he braced himself to squeeze the trigger.

Nerves jangling, he dropped the gun and jumped as it landed on the desk with a clatter. His jittery gaze swung to the office door. Locked, like the windows. There could be no shred of suspicion on those he loved.

He sloshed whisky into the tumbler. His fourth. Not that it mattered. Nothing mattered now. Gulping, Arthur felt the liquid trickle down his chin. He spluttered, choking on the fumes flaming the back of his throat and nose. Well, one way was as good as another. Maniacal laughter threatened to erupt.

Maybe mania was a response to his intense shame. He’d burned up with it. Yet he forced himself to read the newspaper article again. No escaping it. His family were better off without him, without the disgrace he’d caused. He couldn’t put them in the position of having to decide whether to stand by him, or not. And he couldn’t face their disappointed loyalty, or their desertion. He’d put them through enough.

With a surge of emotion, Arthur snatched up his note and added, I love you. I love you all too much. I’m sorry. He placed it at the corner of the desk, where he hoped his blood wouldn’t reach it.

Enough now. A calm fell over him, like watching himself from the outside.

With ritualistic deliberation, he checked the safety catch, drew the gun up like a salute and settled the barrel against his skin. He took a breath – his last breath – his lungs filling, his heartbeat steady, but pain metastasising inside him. Staring at the photo of his family, Arthur pulled the trigger.
Posted by Pewter Wolf at 07:30:00