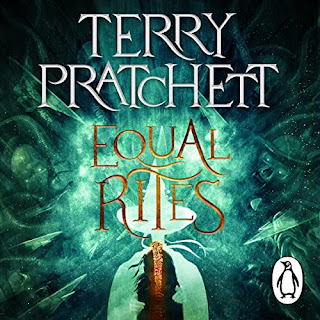 I've been dipping in and out of the Discworld books over the past few years. I plan to do more in the coming few months (mainly the novels featuring DEATH. I read Reaper Man years ago and class it as one of my favourites. One that I should reread before I dare tackle the next DEATH book, Soul Music - which is on my kindle as we speak), but I seem to have been going towards the Witches series, reading Wyrd Sisters, Maskerade and now, Equal Rites (which is classed as the first book in the Witch series, but at the same time, reads as a standalone).
Title and Author: Equal Rites by Terry Pratchett
Publisher: Penguin
Bought, Borrowed or Gifted: eProof gifted by UK publisher via NetGalley in exchange of honest review/reaction though listened to audiobook via library audiobook app.

Wizards in the Discworld know when they are going to die. So, before Drum Billet does, he goes and passes his staff to the eighth son of an eighth son. But he didn't check the newborn's gender until it was much too late...

For you see, girls can't be wizards. It's the lore in the in the chauvinistic (not to say misogynistic) world of magic. And yet, here we are with our first female wizard. And it's up to local witch Granny Weatherwax to somehow train and keep an eye on the girl as she grows into her magic...

You can tell that this is an early Discworld book as Terry Pratchett is still figuring this series out, but you can tell he's almost got it. He's nearly there with the world, the characters, the ideas... and yet, he doesn't always stick the landing. Which probably explains where some people say to not start the series with the early Discworld books and start a little later in the series (with Mort, Wyrd Sisters or Guards! Guards!)

I liked this, but I didn't exactly love it. I love the idea of how this tries to tackle sexism through the lenses of witches and wizards. And this is the book where we first meet Granny Weatherwax.

Granny, like Death, is one of Discworld's best characters, in my honest opinion. She's someone you wouldn't want to cross, but you want her on your side. She's a badass who doesn't fools gladly, but she is flawed as she takes herself and her ideas of magic far too seriously. She is the perfect foil for Nanny Ogg (who we first meet in Wyrd Sisters, who is fun loving and doesn't take life too seriously).

The plot was a tad slow for my liking - like I said, this feels like Terry Pratchett was finding his feet with the Discworld, and yet he's not quite there.

While this might not be my fave out of the three Witches books I've read so far, I enjoyed myself hugely with Granny and I plan to dip my toe into more Witches novels. Although, I did have a few other Discworld and two are calling to me...
Posted by Pewter Wolf at 07:30:00