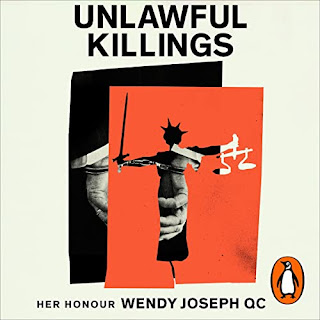 I am not much of a true crime fan. Funny that I'm writing that as I do listen to true crime podcasts (not many and I am very fussy over what episodes/crimes I listen to), but when I first discovered this book on an episode of a crime fiction podcast, Shedunnit, I was instantly fascinated about it. An Old Bailey's judge talking about her time being a High Court judge and talking about the law, the role of a judge and several of her cases. Took me a while to get my hands on a copy (I wanted physical or ebook, but went for audiobook in the end).
Title and Author: Unlawful Killings by Her Honour Wendy Joseph KQ
Publisher: Penguin Audio
Bought, Borrowed or Gifted: Bought
Her Honour Wendy Joseph KC (This has been changed from QC to KC due to the death of Queen Elizabeth II's death) has been a judge at the Old Bailey for over ten years. She's one of a handful of judges at the Old Bailey licensed to try murder cases at the Old Bailey and, in this, she tries to talk about the role of law, how the court works and talks about six murder and manslaughter cases, each with compassionate, humour and tries to show that, while the law is flawed and society is becoming more and more fractured, how each of us should have a cashed interest in what happens in the court room, especially when it comes to the death of a fellow human being.
This is going to be one of my favourite audiobooks of this year. So much so, I bought the ebook and I am currently looking into more UK true crime books/audiobooks that tackle the UK legal justice system (mainly The Secret Barrister and In Your Defence by Sarah Langford).
I'm tempted to say that I enjoyed myself hugely as I whizzed through this so quickly, but that would be wrong as this tackled real life cases. I found this utterly fascinating and highly gripping. Fascinating as we see the law at work from someone who knows the law and believes hugely within the upstanding of the law, but understands that the law or the system is flawed and that courts are hugely strained with everything that is happening the last few years - and this was before COVID. Gripping because how each off the six trials unfolded and we, at the same time as the judge and jury, discovered the evidence.
What surprised me hugely about this was the humour. Wendy Joseph injected humour into her thoughts and emotions as she tells each cases and, with this humour, adds a great detail of humanity to, not just the case, but to the court itself. Whether that be from the barristers, ushers, the judge and other members of the court. I have never done jury service, but I imagine that, if/when I do, I will find the courtroom and members of the legal very intimidating.
I could have so easily listened to more cases and spent more time with Her Honour Wendy Joseph KQ. Like I said, I think this is going to be one of my top reads of this year!
Posted by Pewter Wolf at 07:30:00