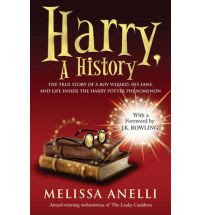 That is what Melissa Anelli, webmistress of popular Harry Potter fansite, The Leaky Cauldron, writes about in her debut novel. She writes about Harry Potter fans used the internet to show their love for Harry and for JK Rowling. From fans creating websites and podcasts to fans creating their own genre of music – Wizard Rock. Melissa also investigates the reasons why people love the books (by interviewing people such as publishers, editors, even JK Rowling herself) and why some people wish the series to be banned (Laura Mallory)…

And while the book looks into the fandom and the build up to the release of seventh and final book, Harry Potter and the Deathly Hallows, we always look back on Melissa’s life and how Harry has affected her life.

As a user of the Leaky Cauldron and as an avid fan of the podcast, PotterCast (first ever podcast I ever downloaded), I was thrilled when I finally got my hands on this book and sped through it in a space of a week. This showed me things about the Harry Potter fandom that I missed and should have been involved with or reminded me of news and how I reacted to it.

But from someone who isn’t a Harry Potter fan, people would find out how the world of media changed due to the Harry Potter movement and would see parallels with other fandoms such as the Twilight fandom…

I love this book and I feel that if you’re a Harry Potter fan, you should have this book. Not because it has a foreward and interviews with JK Rowling, but because it’s a celebration of Harry, his creator and, more importantly, the fans…!