GoodRead - "If I Stay" Book Review

In Young Adult department in bookshops now, it won’t surprise you that there has been a wave of hard-hitting, gritty books about death or dying. Not misery-bios, but fiction books that talk about death and how a teen would cope with death. The prime example of this is the acclaim novel “Before I Die” by Jenny Downham. 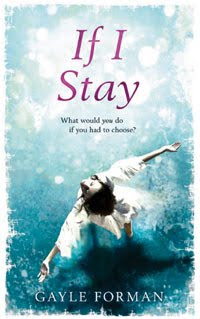 Another book, which is similar, but not, is “If I Stay” by Gayle Foreman, and that’s the book I’m going to review now.

“If I Stay” follows Mia, a talented cello-playing seventeen year old, who is involved in a car accident, which kills her entire family and leaves her fighting for her life. As she is rushed to hospital, Mia has an out-of-body experience where she watches her grandparents, her best friend and her boyfriend rush to her side and will her to survive. But Mia has to make that decision. All the choices she had that morning are gone, and she’s left with only one decision: to stay or to go. To live or to die.

Before I go any further, the book caused a fuss in America. Before it was published. So much so, that Summit Enterainment (the production company behind films such as Twilight, New Moon & Knowing) bought the film rights and Catherine Hardwicke is going to direct this movie. All this happened BEFORE the book got published in the US!

And I can see why. I got the book on a Bank Holiday Monday after heard reviews online. I bought it, read a few pages and desperately wanted to read it, but I couldn’t due to time and me reading another book. So, several days later, on a Sunday, I sat down and started to read it. I read this book in one sitting (almost unheard of with me!). This book has a pulse (like Shiver by Maggie Stiefavter) that once you fall into sync with, makes the impossible almost impossible to stop. It’s, as if, the music that is so important to Mia and her boyfriend, Adam, is an actual character and an important character, just as important as Mia, Adam and Kim, Mia’s best friend.

This book is one of those books that will pull at your heartstring. So some of you might not want to read this book in public – or listen to slow music that might be used on Grey’s Anatomy (my main mistake while reading this was discovering/listening to Greg Laswell’s “Off I Go” [song used in the Season 5 Finale*]. A song which, if I can say, I want on the movie soundtrack…). Apart from that, a book that you will read quickly, but will linger in the mind long after you closed the book.

(PS – Another book that lingers in the mind long after you finish it, Shiver by Maggie Stiefavter, is going to be turned into a film. The film rights to the book has been sold to Unique Features! Am happy about that! So, if Maggie is reading this [which I doubt], Congratulations!)

* - While posting this note, I started listening to the Fray's song "Never Say Never". Another perfect choice for Mia and Adam.
Posted by Pewter Wolf at 19:51:00