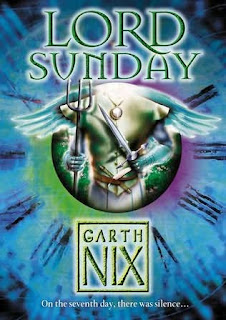 But before I briefly talk about it (without spoilers!), you will see the UK, US and the Australian covers and you will read the Product Description from Amazon.co.uk and Wheelers.co.nz.

Amazon.co.uk Product Description
In this seventh and last book of THE KEYS TO THE KINGDOM, the mysteries of the House, the Architect, the Trustees, the Keys and the Will are revealed, and the fate of Arthur, our Earth, and the entire Universe is finally decided. Arthur has wrested the Sixth Key from Superior Saturday, but has fallen from the Incomparable Gardens; fallen not to the Upper House but to somewhere completely unexpected. Alone in enemy territory, as his mind and body are further transformed by the power of the Keys, Arthur must struggle with himself as much as with his many enemies. Meanwhile, Arthur's friend Suzy Blue plots an escape from her prison in Saturday's tower, as battle rages above and below. Saturday's elite force is pressing on into the Incomparable Gardens, while her massed sorcerers fight a desperate rear-guard action against the Piper and his Newnith army. On earth, Leaf has to cope with the aftermath of a nuclear strike. Responsible for all the Sleepers in Friday's private hospital, she needs all the help she can get, particularly as Leaf herself has become a target for intruders from the House. And the tide of Nothing continues to rise, destroying everything in its path... 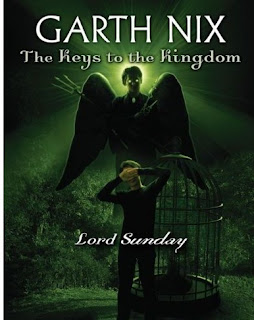 Wheelers.co.nz Product Description
Master of the Incomparable Gardens, the last of the Trustees, and the most powerful Denizen in the house, Lord Sunday is a fierce opponent. And Arthur is running out of time. With everything falling to pieces around him, Arthur must be quick if he is to stem the tide of Nothing and save the House and the Secondary Realms. But he is beset by worries. Will he ever get home to his family? Does he have a home and family left? Is he even really human anymore? And perhaps most urgent of all: What will be revealed when the Will of the Architect is finally made whole? Lord Sunday is the stunning conclusion to the blockbuster Keys to the Kingdom series. 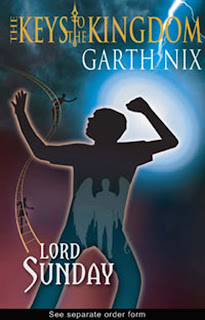 Now, am going to VERY BRIEFLY chat about the podcast of Garth Nix reading the first and second chapter of Lord Sunday (there’s no prologue read, even though each book in the series has one… hmmmm…)

Chapter 1 is about Arthur and what happened to him after the cliffhanger ending of Superior Saturday. It’s quite surprising for me as this chapter, Arthur isn’t the Arthur I relate him. He’s now beginning to struggle to stay human as he has becomes more Denizen and not a nice Denizen at that.

Chapter 2 is about Suzy Blue and this chapter brings some much-needed light relief after the heavy first chapter (has nothing to do with the fact that she’s one of my fave characters within the series). We see what happened to her after the events of Superior Sunday and we met a new character who I love! You might think he’s a bit slow but I love him!

And that’s it! No more from me on the subject! I’m going to put the link for the podcast below and I will wait (impatiently) for Lord Sunday…