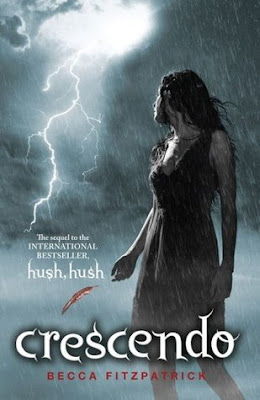 Before I tell you guys my views on this book, sequel to the awesome, “Hush, Hush”, from the bestselling author Becca Fitzpatrick, let's chat about Crescendo...

After the events of Hush, Hush, Nora should have learnt that her life wouldn't return to normal. Not after she got herself a Guardian Angel, Patch (who is anything but angelic). But, recently, Patch has been pulling away from her, spending time with Marcie Millar, a girl who has made Nora's life hell.

Worse, an old family friend, Scott Parnell has returned to Coldwater. Although she finds his attitude infuriating, she finds something drawn to him. Although she has the strong feeling that he's hiding something.

With images of her murdered father haunting her, Nora begins to search for the mysterious truth, putting herself in dangerous situations. But some truths are better left being buried, but if Nora's not careful, the truth could destroy everything – and everyone – she loves and trusts.

I have just literally finished this book and ... WHAT THE HOLY CRABCAKE!?!?!?

This book was, maybe, more gripping than Hush, Hush. And more emotional. There were times that you wanted to get to the characters and shake them, but Becca writes Nora's turmoil and emotional pain almost perfectly. A few reviewers have said that this was like watching two friends tear each other to bits and you being forced to choose a side, and with reviews saying that, you know the the author wrote this with care, and maybe with a touch of glee. What better way to make you want something so badly? Give it to them, then take it away in almost the cruellest way. I take my hat off to you, Becca!

And, before I go any further, Vee! I think Vee was awesome in this book. I liked her in Hush, Hush. But in Crescendo, Vee was awesome. She had the best one-liners!

Now, as much as I want to go any further, the ending... WHAT THE CRABCAKE! A double twist!!! I can not wait for the third book in the series, Tempest!

Plus, I will be meeting Becca at the book-signing this coming Sunday so I can't wait to get a signed copy and maybe grill her over the ending!

SONGS AND BOOK TRAILER TIME! Remember, the song/s (not sure how many I want to add to this blog) are MY choices that I was listening to while I was reading. So, ENJOY!

With this song (which I LOVE!), I am going to say the last minute and a half is perfect (start at the 3 minute mark). The slowly building of the song... I will also add the clip where I heard this song and how perfect it is for Crescendo, then no more YouTube! Promise!