Hello everyone! Welcome to the Blog Tour of Nightshade by Andrea Cremer. MY FIRST! And I'm the 13th blog, according to Atom Books (have I told you guys I love the number 13?). And my blog post for this tour is about Andrea Cremer and her writing process, which I am still shocked and thrilled over having (even via email!). I hope you like the interview... 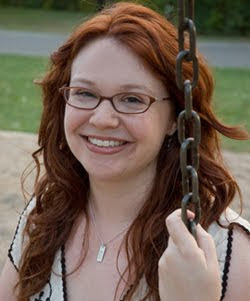 Andrea, thank you for answering some of my questions. First of all, I wanted to know where the idea of Nightshade came from?
Calla was the inspiration – my books are usually inspired by characters, and the plots are driven by the problems/hopes/dreams of those characters. With Nightshade I knew Calla was a strong, independent young woman and that she was a warrior. I also knew she was a wolf, which presented a major challenge for me because I’m generally not a fan of werewolves. I ended up creating a new wolf mythology involving witchcraft that better portrayed the ways I’ve always viewed wolves: as beautiful, intelligent and social rather than the diseased or cursed half-man/half-beasts of lycanthropy.

I love the mythology about the Guardians, the Keepers and the Searchers. Where did that all come from? And far back did you research their mythology?
Thank you! Creating the mythology was one of my favorite parts of writing the novel. It emerged as an offshoot of figuring out Calla as a character. I knew she was a wolf warrior, but I also knew she was in trouble. The mythology was my way of discovering what could be more powerful than a Guardian – and the answers was witches. I focused on witchcraft because my ‘day job’ is as a history professor. My research focuses on the early modern period (1500-1800), which is the era of the Inquistion and witch hunts. The research has gone way back because my fourth book, which is a companion to the Nightshade trilogy, is about the origin of the Witches War in the 1400s.

Most people who have read Nightshade talk about Calla and how kick-ass she is. Was that always your intention or did she evolve into that as you wrote her?
From the moment I met her, Calla made it clear she was independent, kick-ass and unapologetic about it. I loved that and I wouldn’t have her any other way.

I love reading about Calla's pack members and Ren's too. Were they as much fun to write as they were to read?
I love the packs so much I don’t know where to begin. They are like family to me!

I want to ask some questions about writing. When did you get the writing bug?
I’ve written as long as I can remember – since I was a child I’ve been a daydreamer, always thinking up stories. I didn’t think that writing was something you could do for a living though so I went to graduate school and became a history professor. Two summers ago, fate took matters in her own hands when my foot was broken in a horseback riding accident. I couldn’t walk for twelve weeks and since I was stuck on the couch I started writing a novel. Once I started writing I couldn’t stop and I knew I had to do everything I could to pursue writing full time. 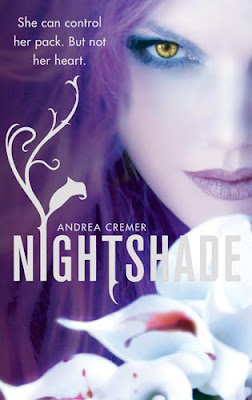 Most people (myself included) want to know about how you got your literary agent and your publishing deal? Was it quite an easy journey or was it quite hard going?
I often think I was lucky because I didn’t know anything about publishing when I decided I wanted to become an author. I just turned to research for answers and found out that I’d need an agent, and that meant querying. I started querying in late 2008 and got the request for the full ms from my agent in February of 2009 followed by an offer of representation in March. At the time it felt like agony but now that I’ve learned how the industry works I know that my experience has been lightning fast.

How long did it take you to write Nightshade from the original idea?
I wrote the first draft between Thanksgiving and Christmas of 2008 and then revised through February, did more revisions with my agent through the spring and then final revisions with my editor in the fall of 2009.

What is your typical day of writing?
It varies quite a bit. Right now I’m on sabbatical so I have a flexible schedule, but when I’m teaching I adjust my writing to accommodate classes and class preparation. I don’t have a particular time of day that I prefer to write I just try to sit down and write whenever I can. I’m a ‘binge’ writer, meaning that when I can I like to sit down and write for hours and hours.

Random question: Did you write Nightshade (and Wolfbane) in long-hand or straight onto the computer?
My long-hand is illegible, so I’d be in trouble if I tried to write that way! My handwriting also can’t keep up with my brain, whereas I’m a really fast typist. I’ll jot down notes longhand if my laptop isn’t available but I do most of my writing on a computer.

While you were writing Nightshade, you must have written scenes that you, sadly, edited or completely cut it? How did you decide what stayed in and what “little darlings” you cut out?
Editing is all about tightening up the pace. I like to keep readers as close to nail-biting as possible in a book, so the bits I cut out were moments where the plot relaxed a bit.

Was there a scene you loved writing but you had to edit out?
There was one scene that I cut which had Calla, Ansel, Mason and Bryn driving from Calla’s house to Burnout and involved their banter in the car. I loved it but it wasn’t essential to the plot, so I ended up cutting it. I love seeing the pack interact so I’d be happy to have loads of scenes just showing the pack hanging out, but it probably wouldn’t do much for pacing here :) 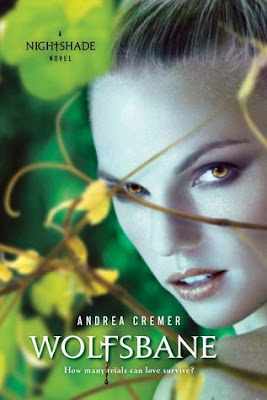 What do you feel when you see people reading Nightshade and their reactions on blogs/facebook/twitter? Does it feel surreal?
It's definitely surreal. I keep waiting for it not to be surreal but I'm somewhat convinced it will never feel 'normal' and I think that's a good thing. Honestly I'm wary about reading reviews or reader comments only because I have a thin skin and I'm terrified someone will hurt my feelings. Despite the incredible response to Nightshade negative reviews are simply par for the course, so that fear is probably something I need to just get over!

Now, I have to ask, what little titbits can you tease us about with Wolfsbane and, dare I ask, Bloodrose?
I have a strict no spoiler rule so I can’t share much. I can tell you that you’ll learn a lot more about the war between Keepers and Searchers in Wolfsbane, you’ll meet new characters, and you’ll see lots more of all the pack members in books 2 and 3.

I must thank Andrea Cremer for answering my questions and I must, also, thank Rose from Atom Books for allowing me to ask questions to Andrea via her!

The last day of the Nightshade tour is this Friday (aka 14th January) on the Atom Books website. So, till then, either get your hands on the book (it is awesome!) or check out the websites below!