Even since Becca Fitzpatrick Said the title of her third book in her Hush Hush saga was TEMPEST then she took it back, saying it didn't feel right for the book, readers of Nora and Patch have been waiting... and checking out Fallen Archangel... and waiting...

And now, we have a title!

And this was what Becca said:

At long last! I am thrilled to finally announce the title of the third book in the Hush, Hush saga! If you follow me on Twitter, or if you're a fan of my Facebook page, you've probably noticed there has been (just a little!) drama surrounding this title recently. Ever since I decided Tempest wasn't the right title for the book, I've been on the search for a worthy replacement. I spent weeks sorting through titles and, in the end, for one reason or another, none of them felt right.

I always thought the title of the third book would be loud— something a crescendo would build up to. And it made sense; the storyline of the third book is daring and twisty and oh so romantic. Which is why I was surprised to find, in the end, the title I chose isn't flashy or loud or culminating. Instead, it's a haunting word, quietly powerful, filled with mystery and beauty. A word that means to put doubt, fear and anxiety to rest. A word that is synonymous with stillness, secrecy and all that is forgotten.

The noise between Patch and Nora is gone in this book. They've overcome the secrets riddled in Patch's dark past...bridged two irreconcilable worlds...faced heart-wrenching tests of betrayal, loyalty and trust...and all for a love that will transcend the boundary between heaven and earth. Armed with nothing but their absolute faith in one another, Patch and Nora enter a desperate fight to stop a villain who holds the power to shatter everything they've worked for—and their love—forever.

With much pleasure, I give you the title of the third book... 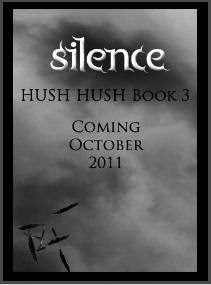 If you want to read a transcript that Fallen Archangel & MundieMoms had with Beccam click here!
Posted by Pewter Wolf at 14:33:00