I've been wanting to blog this book for a while now, but I have always thought "No one wants to read me go 'OMG! This sounds cool!'." But, I've decided to show you the cover anyway with the blurb from GoodReads. So, here is it! 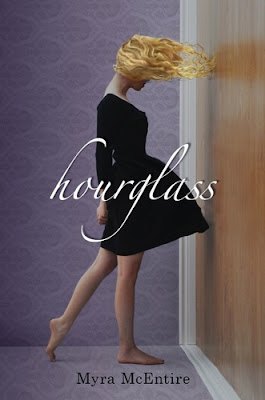 "Since the age of fourteen, Emerson Cole has seen strange things – dead things – swooning Southern Belles, soldiers, and other eerie apparitions of the past. She’s tried everything to get rid of the visions: medication, counseling, asylums. Nothing’s worked.

So when Emerson's well-meaning brother calls in yet another consultant from a mysterious organization called the Hourglass, Emerson’s willing to give it one last try.

Michael Weaver is no ordinary consultant. He's barely older than she is; he listens like no one she's ever met before; and he doesn't make her feel the least bit crazy. As Emerson ventures deeper into the world of the Hourglass, she begins to learn the truth about her past, her future--and her very life."

Now, I have no idea if/when this book will hit UK bookshelves, but it will be out in the USA in May 2011. So, will have a hunt for it because... will, it sounds interesting! Don't you agree?
Posted by Pewter Wolf at 21:46:00