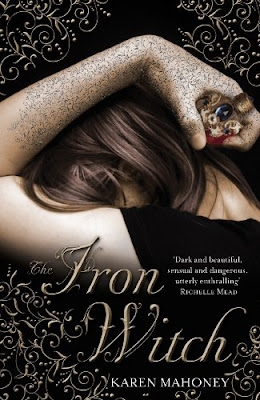 Donna Underwood has always been called a freak. After being branded with iron tattoos on her hands and forearms that happened after a horrible attack that killed her father. She's even more of an outcast in the secret world she lives in. A secret world of alchemy and elves...

But events are happening. Events she never expected. And when the biggest event happens, is Donna willing to sacrifice one of the world's greatest secrets to save the people she cares about...?

I had to be SO VAGUE on the above writing! I don't want to reveal too much!

Now, to start, the cover. It is BEAUTIFUL, isn't it? I just love it. It's very striking, yet simple.

Now, the story. Some of you lot may find this book slow going. If you are aware of The Event that happens in this book and you expect it to happen within the first few chapters, then nope. It takes a while for that to happen.

Instead, we have a book where we get to be introduce the characters and, because of that, I love it. I love getting to know Donna's best friend Navin and the mysterious Xan (am glad this is a trilogy because I want to know MORE about those two. When I told people on Twitter how shock/excitment over something that happened in the book, I got into a huge twitter conversation about who would be whose Fictional Husband!).

But I ADORE this book because of one reason and one reason alone – Donna herself. I love reading in her voice and I love everything about her! She's normal yet not normal at the same time. She is a normal girl who is in a world that isn't normal. The events that happen to her aren't normal. But I couldn't help but relate to her and, because of that, fall a little in love with her. There's something real about her. In one point of the book, (page 230), Donna said something that made Xan react: 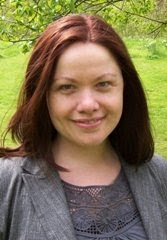 I read that little exchange and laughed, because I do that. I put myself down, the same way Donna does and I have family members and friends, telling me off for that very reason. I related to her and, when I tweeted the author Karen Mahoney, saying something like “... I need Wood Queen [the sequel], like, NOW!!! I love Donna!!!”, Karen kindly replied, saying she was glad I loved Donna because she “...tried to make her 'realistically awesome' – I like that girls that can save themselves...” And yes, Donna is realistically awesome, isn't she?

I can't tell you how much I liked this book, or how much I love Donna. But I love Donna so am quite thrilled that this is a trilogy! I demand to read what happens next to Donna ASAP! You hear me, Karen Mahoney! AS SOON AS POSSIBLE!

(Also, I would like to thank the lovely Karen Mahoney & Lynsey Newton. Lynsey for, somehow, getting me a signed copy of Iron Witch, and Karen for not only signing to book but also chatting to me at Cat Clarke's book launch!)