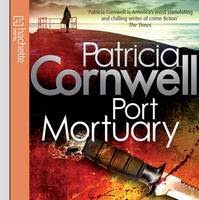 Am going to be honest with you. I don't like Patrica Cornwell. I have only ever read one of her books - Postmortem - and, though I didn't really enjoy it, I found it interesting to read. So, several months later, when her "latest" book came out - Book of the Dead - I bought it and tried to read it. I barely got past chapter ten. I HATED it! It had switched from first person to third, it was written in the present (which is fine expect the word "says" was used. Like every time someone spoke! No "explains" or "exclaims", just "says".) and there were other things that bugged the hell out of me. So much so, I think I might have thrown the book across the room out of frustation before giving it to a charity shop and started on my first Kathy Reichs' novel - Bones to Ashes - which made me quite like reading crime on the rare occasions I do (Kathy Reichs and Tess Gerristen are my main two crime guilty pleasures).

So, when I (randomly) listened to the teaser of Port Mortuary, I decided to give Dr Kay Scarpetta one last chance to redeem herself to me. I hope that I wouldn't regret it, though it did take some time till I made myself listen to it.

Port Mortuary - the 18th Scarpetta novel - shows Scarpetta at Dover Air Force Base, where she has been working on the fallen and masting the art of CT-assisted virtual autopsy, which the Government want to introudce to the provate sector, starting with the new Cambridge Forensic Center in Massachusetts that she heads up (on behalf of the state, the federal government and MIT). But she is urgently called away to deal with a mysteriously death which is eeirely close to her home. A young man drops dead, apparently from a cardiac arrhythmia. But when his body is examined the following morning, there are stunning indications that he may have been alive when he was zipped inside a pouch and locked insider the Center's cooler. Various 3-D radiology scans reveal more shocking details about internal injuries unlike any Scarpetta has ever seen…

What is going on? What caused this man to had a heart attack but then bleed out once his body arrived at the Cambridge Forensic Centre? Why did he have a hidden camera inside his headphones? What happened to his dog that was seen on the hideen camera's footage? And why does a case that happened twenty years ago in South Africa bothering Scarpetta?

Now, in the world of Kay Scarpetta, this book is huge. It's the first book since The Last Precinct that Kay actually told the story. So, if you are a Kay Scarpetta fan, this is BIG NEWS!

Within the first hour or so, I realised why I had issues with Book of the Dead. The book is SO clinical! It feels so clinical that there seems to be no room for ANY emotion, and the only time I felt I saw any emotion (from anyone!) is when Kay accidently comes into contact with a drug that made her high, paranoid and worried that she might be on the verge of having a heart attack.

And as for the story... talk about confusing! I finished the audiobook early this afternoon and I feel like the murderer was SO left-fielded and it came out of nowhere that I think I feel a bit cheated, even though the clues (well, I say "clues"...) were there...

I'm not 100% certain how I felt about the reader - Kate Burton - but I felt I could listen to her, although I have read reviews that people think she has made the story sound "end of the world" and dreary.

But I'm sorry. I have tried to like the Kay Scarpetta series. I've tried! And I can't like it. Am going to stick with Tess Gerritsen and Kathy Reichs in future.
Posted by Pewter Wolf at 17:29:00