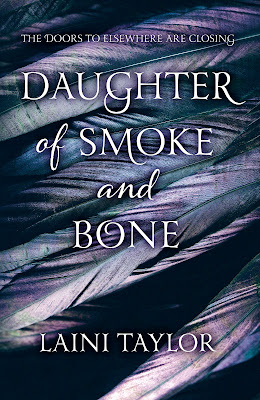 Yesterday, news was revealed that the movie rights for Laini Taylor's DAUGHTER OF SMOKE AND BONE was snapped up by Universal after a fierce bidding war with Paramount. Twitter went nuts with this news and this morning, Hodder sent the following press release:

Los Angeles, CA, December 14, 2011 — Universal Pictures announced today that it has acquired the worldwide rights to the celebrated fantasy novel Daughter of Smoke and Bone written by Laini Taylor. A highly sought after property in Hollywood, the book was
published this September and is the first in a trilogy. Universal’s Co-Presidents of
Production Peter Cramer and Jeff Kirschenbaum made the announcement.

Daughter of Smoke and Bone was released in over 25 countries to critical acclaim and has been one of the most well-received books of the year. Honours include Amazon.com Top Ten Books of 2011, Publishers Weekly Best Books 2011 and the New York Times Notable Books of 2011.

The novel has also been hailed by UK critics – the Guardian called it, “Remarkable and beautifully written… The opening volume of a truly original trilogy.” And the Sunday Telegraph said, “For once the frenzy over a teen novel is justified. Daughter of Smoke and Bone by Laini Taylor is one of those books that blots out reality, so consumed do you become in its fantasy world.”

At the news of the acquisition, Laini Taylor said, “My goal is always to write stories that readers will want to climb inside of and live in, and which – I hope – will allow them to just lose themselves in the page. It is a hugely thrilling prospect to think about Universal and filmmakers translating my world onscreen and giving it a second life in such a grand way. I’m over the moon.”

Daughter of Smoke and Bone is published in the UK by Hodder & Stoughton. The second book in the trilogy will be published in September 2012.

About Universal Pictures
Universal Pictures is a division of Universal Studios (www.universalstudios.com). Universal Studios is part of NBCUniversal. NBCUniversal is one of the world’s leading media and entertainment companies in the development, production and marketing of entertainment, news and information to a global audience. NBCUniversal owns and operates a valuable portfolio of news and entertainment networks, a premier motion picture company, significant television production operations, a leading television stations group and world-renowned theme parks. Comcast Corporation owns a controlling 51% interest in NBCUniversal, with GE holding a 49% stake.
Posted by Pewter Wolf at 21:15:00