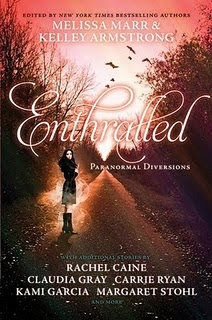 I went to the Harper Collins Bloggers event earlier this year and I didn't get my hands on this. So, was kindly sent a copy (thanks Rosi!) and enjoyed reading these paranormal short stories.

Now, there was only two reasons why I wanted this book: Kimberly Derting and Ally Condie. I know, pretty lame reasons, but I love this authors so I had to read these!

Now, the idea behind this collection of short stories is interested. In the US, these authors were involved in a tour called Smart Chick Kick It where authors organised and toured, talking about their kiss-ass heroines and writing. And, to keep the tour experience alive for people who went (or couldn't go), they decided to write a anthology with the theme of road trips, edited by Melissa Marr and Kelley Armstrong.

Now, as this is a collection of short stories, the first thing you have to be aware is that not every story is going to appeal to you. It's very much a mixed-bag. You have stories about fairies, vampires, angels, zombies, angels and goodness knows what else! But, I think it's kinda important to, sometimes, read outside your comfort-zone and read authors that you weren't aware of. You might discover little gems in there...

And I did. I read them in order (which you don't have to, but as I was going to review this, I felt I had to) and it is very interesting to see where the writers went with the theme "road trips".

Now, here is a major problem with this collection of shorts. There are sixteen stories in this collection and around nine of them were linked to the series the writers are writing or a follow-up to another short story in another anthology. Not that I'm saying that's a bad thing, but if you are unaware of the series in question, you might have a "Huh?" moments.

But I found several stories I like, so (because this is my blog so I can) here is five randomly-picked stories I thought "whoa!" over (in book order):

1. RED RUN by Kami Garcia - I know of the Beautiful Creatures series for a while, though never read it. So I read this and couldn't help thinking how gothic it was.
2. THINGS ABOUT LOVE by Jackson Pearce - this is linked to her debut, As You Wish but this was nice story where there was a male lead (yeah) and he was gay and it wasn't a big deal (HURRAH!!!). I would date Lawrence in a heartbeat. Just saying...
3. BRIDGE by Jeri Smith-Ready - Now, I have read Shade and I thought it was ok. But this was an interesting thing to add to the series. And as the story was told in verses (like a song), this was one of the fastest shorts I read!
4. SKIN CONTACT by Kimberly Derting - I love Kimberly! I just love her! And this story, an extra to her Body Finder series (again, with a male lead! How rare in YA paranormal!) got me very excited. And it made me want to read the next book in the series or her new book, The Pledge...
5. LEAVING by Ally Condie - I know some of you guys have mixed feelings about Matched, but I liked it. A lot. And this was another story set in a dystopian future. This was one of the only stories I wished was longer!

This is a mixed bag but there are little gems in here. You juts have to look for them...
Posted by Pewter Wolf at 08:00:00