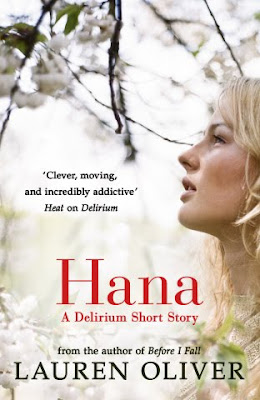 As some of you MIGHT be aware if you've been reading my blog since early last year, I tried (and failed) to read the much-hyped and the much-loved Delirium by Lauren Oliver. I found it very hard work, which was a huge let-down as the idea behind the story - that love is a disease that needed to be cured - was such an shocking and interesting idea. And I know I am one of the few in the blogging world that didn't like or click with this book.

So, when I was told that Lauren Oliver had released an eBook short story, based on Lena's best friend, Hana, I had my doubts. I didn't like Delirium so why should I read this short story? But, after thinking it over, I decide to try one last time with this series. This was it: make or break time.

In Delirium, Lena and Hana were best friends. But with months before they take the cure, Lena begins to fall in love and Hana made a decision that tore them apart. In this original short story, we hear from Hana's point of view and we discover why she made that decision...

Now, am going to be honest, I read Delirium till about midway through the book so some of the events that happened, I remembered and I went "Oh! That happened!" so this is very much a story for the fans of the series! If you are reading this to get a taster of the trilogy, you might want to read this after Delirium and before its sequel, Pandemonium.

But the story was interesting. I always like these stories where the point of view has changed so you see what happened from the other side. And with Hana, you do see what happened and why she made the choices she made.

The twist ending. Right, this is about 75% of the eBook (the rest is a taster of Pandemonium so if you're excited about it, it's there!) and it took me several days to go "Oooh!" over it. I got very confused as it wasn't stated. It was, to me, hinted at and I felt I had to read the taster for Pandemonuim to get it.

Now, I am glad I went back into this world and read this as it set my mind at rest with this series. While Lauren Oliver's writing is unique and the idea that love is a disease that must be cured is an interesting idea, I won't be returning to this series. But at least I went back and gave it one more shoot, as sometimes we are very quick to judge books and sometimes, we need time to go past before we can make a real decision.