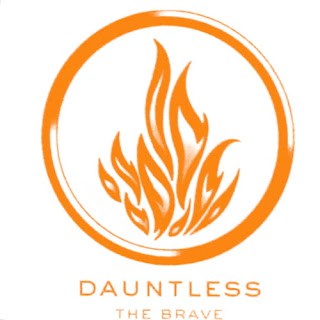 When I found out I was Team Dauntless as part of the #InsurgentUK, I was a mix of thrilled and laughing madly to myself and for the UK publisher for seeing me as Dauntless. Thrilled as Dauntless is, of course, the best Faction in the Divergent trilogy (I mean, Tris and Four were part of it! I mean, come on!), but laughable as I don't see myself as brave or fearless. I see myself as someone who has fears but, somehow, manages to copes with them.

So, when my fellow Dauntless were chatting about our tour and suggested I write about bravery and ask the question what is the bravest thing I have ever done, I wasn't sure if I could answer them with the rightness that it deserves (I, secretly, wanted to write a short story about bravery). But the more I thought this question over, the more I realise that I could answer it with the rightness it deserve as it question my views on what bravery means to me.

So, to answer the question of "what is the bravest thing I have ever done?". Well, two things have happened in my life that you could consider brave.

The first was coming out. I know that doesn't seem like a true act of bravery, but it was terrfying. I had to trying to find a way to tell my family for a while and, one day, my mother decide to join facebook. This, for a reason I'm not 100% certain I understand, made me tell her. I was scared of what this news would mean. I was scared of her reaction. But Mum, calm as anything, went "Well, I have suspect for a while now." And with that, during the BBC 10 O'Clock news bullet, Mum and I talked. I can't remember about what, exactly, but we talked and it was nice that we talked about what this meant and how she was happy for me to be true to myself. The next day, she told my sister and got the response of "Well, about bloody time."

If you have come out to your family, then you understand how terrifiying and unnerving it is, and how to its all of your courage to just say it, even though you.

The second bravest thing I've done to survive my father's death. It was very sudden and it felt like my world had ended. Not just my world, but the world of my family. The man I looked up to, the man who who had been there my whole life, was gone. There's a line in Lemony's Snicket's "The Bad Beginning", which sums this up: "If you have ever lost someone very important to you, then you already know how it feels, and if you haven’t, you cannot possible imagine it."

And, somehow, we were meant to carry on living our lives, even though our world had ended. But we did. Somehow, we did. Even though this was hard and painful and frightening. We would burst into tears for no reason (I remember one time suddenly carrying in a temp job's toilet as I heard the song "Remain" by Kubb on my iPod. My dad had never heard of the band, so no idea why that happened). Even though I would find going to sleep terrifiying as I feared I would never wake up again. Even though the world outside the window kept going, while it felt like our world had stopped. But with all of these, we all supported each other and, with our private and collected bravery, we carried on into the unknown future.

I know that this isn't coming across the way I want it to. But, if you ask who I consider to be the bravest people in the world, I would instantly answer by saying "My Mum and my Sister". There are two of the strongest, fearless and utterly remarkable women I have ever know. I owe them so much in the past few years.

And now we get to the point of this blog post: bravery. Or rather, my view on bravery. We all have the power to be brave and fearless. We can be brave like Tris, Four and the rest of Dauntless were in Divgerent, by going things for the adrenaline rush. We can be brave like huge acts of bravery, such as solders and aid-workers who go to warn torn countries, or standing up for people who have no voice such as Aung San Suu Kyi or Martin Luther King. Or we can be quietly brave, by being there for someone who needs someone to hold their hand in a time which frightens you both.

I valve bravery in a person, as I feel most of us do. And while I value the huge acts of selfless bravery, I also value the smaller, often unnoticed acts of bravery, and that, to me, is what being a Dauntless is about. Being brave and fearless no matter the situation: whether that bravery is life-changing or not.
Posted by Pewter Wolf at 07:00:00