GoodRead - A Confusion Of Princes 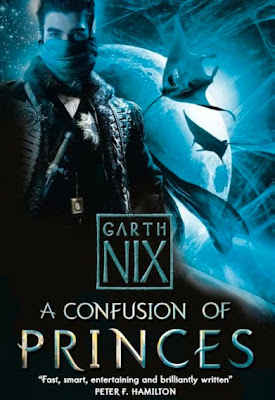 I loved Garth Nix from the moment I read Sabriel (I still want a film version of this book and I still want Tim Curry to be the voice of my fave character, Moggit!). I feel this is very important to state before I continue with my review of his latest book, A Confusion of Princes (or, if you have read my twitter when I was reading it, A Confession of Princes). When Rosi from Harper Collins emailed, asking if there any books coming out in the months ahead (this was in early February), I asked for Garth Nix without thinking (along with Fever by Lauren DeStefano and Insurgent by Veronica Roth - but then, who wouldn't?). And, a week later, I received a copy of A Confusion of Princes, even though the book isn't out till middle of May, making it over 3 months early! As I love Garth Nix, I dropped everything and started to read it. Hence, even though you're reading this now (late April/early May), I actually am writing this on the 1st March. So 2 months ahead of myself.

A Confusion of Princes (Garth Nix's first book for "older readers" [publisher's words, not mine] since he wrote the third book in the Old Kingdom series, Abhorsen) follows the three deaths of Prince Khemri, enhanced human being and connected to the Imperial Mind. All he wanted was to be the next Emperor. But no sooner as Prince Khemri graduate to full Princehood that learns that there are millions of Prince, each willing to kill the other, and only one of them will be Emperor… And it's not long before Khemri begins to question everything about the Empire, the Imperial Mind, the Emperor, even himself…

Not sure how to start this but say it's a standalone! This makes me a little happy because, as much as I like series and trilogies, sometimes I want one book where you close the book and know that it's ended, rather than wait for, usually, a year to find out what happens next!

And it's sci-fi! A Space Opera, according to the Press Release (not sure what that means but it wasn't, as first thought, a soap opera set in space where, halfway through, a character would turn round and say "It's not your baby"). And it's actually sci-fi! You have alien technology, alien cultures, alien weaponry, actually aliens. It was full on sci-fi! And, as me and Rhys from Thirst for Fiction chatted on Facebook, there isn't many real sci-fi books in YA at the moment. 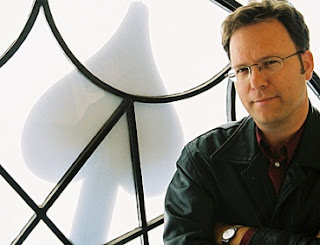 Because it is very sci-fi (and that is a little outside my normal reads), it took me a while to get my head round all the tech-slang, the titles and how everything worked and clicked together. If you're a huge sci-fi reader, then this won't be a problem for you. If you're not a sci-fi reader or you dip in and out of the genre, you have to be really with it to remember the difference between Psitek, Bitek & Mektek (I still not 100% sure I can tell the differences are between these three!) or you will put the book down a lot to think everything over (which I also did on few occasions).

Also, character development. Now that's a point I wanted to raise as I'm in two minds over it. As the story goes forward, Prince Khemri's character changes. Not much but a little as he begins to think for himself and release that, to use the expression, all that glitters isn't good. Garth wrote this change very subtly. It wasn't one big moment and everything changed. There were little moments that slowly, over time, made Khemri think about the situation he was in, and figure out what he actually wants.

In my eyes, nothing is going to be as good as Sabriel, but Confusion of Princes does try! This book will make his fans be itching to get it, and most sci-fi readers, I think, will enjoy this book!