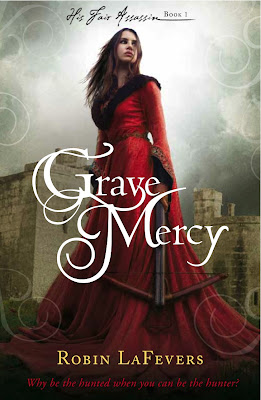 I want to state something before I go into this review. I am not a historical reader. It never really interested me and if when I do read something that has a set of history, I need it to be laced with fantasy. I need something to take the oddness away, if that makes anything.

So, when Eve from Andersen Press emailed asking if I wanted to read this, I was a little hesitant over it. But I read the info and watched the trailer. It was the trailer that changed my mind and made me go "I have to read this!". There's a line in the trailer that goes "Why be the sheep, when you can be the wolf?" and instantly I thought, "Now that sounds interesting. I shall investigate this..."

In medieval Brittany, there is a convert. The convert of Saint Mortain, and the nuns at this convert aren't normal nuns. They are assassins, doing the work of their saint.

When Ismae is sent to the court of Brittany, she finds her suddenly unprepared for court life. Not only the games of intrigues, treasons and politics, but also of the heart... Soon, her loyalists will be tested...

Now, as I have stated before, this is a historical novel and I don't do historical reads. So, maybe this is me being outside of my comfort zone (as a book blogger, I feel that you have to read books that are in genres you don't usually read), but this book was long and quite intense. I don't mean intense as in it had intense action scene or romantic love sense, but it was just intense. You had to learn EVERY little detail of court life, of poisons, of convert life, of politics. And because of this intense, it took me AGES (at least over half way) before it clicked in my brain and I went "Oh! Ok! I think I get this now!" and because it took so long to understand that, within the second week of reading this (this took nearly 3 weeks for me to read, which is slow by my standards), I had to stop and read a candy floss book to give myself a break from the intensity! 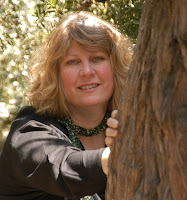 And because of the intensity of the book, the pace felt slow and this is why I felt it was a long read. The pace was slower than my normal reads and there were times I was going "Would you hurry up and get to the point!". On several occasions, I wanted to grab a Basilisk fang and stabbing the book, waiting to see if the book would bleed ink like in Harry Potter and the Chamber and Secrets.

But, with all that said, I can see people liking this. On more than one occasion, I thought that fans of the Poison Study series by Maria V. Snyder and The Old Kingdom/Abhorsen series by Garth Nix would like this.

And with everyone else I know seeming to go "This book is awesome", I feel like the odd one out saying "It's good, but not my cup of tea". But I think if you're a reader who likes historical reads with an edge of paranormal/fantasy, you might want to investigate this book. But for me... sorry...

Although I am intrigued on the sequel in the series, Dark Triumph, who follows a character who seems completely broken and flawed (and possibly on the verge of a mental breakdown)... Also, if I see the word "Mayhap" (I think it's "maybe" but not sure) in the next few months, I will not be held responsible for my actions...