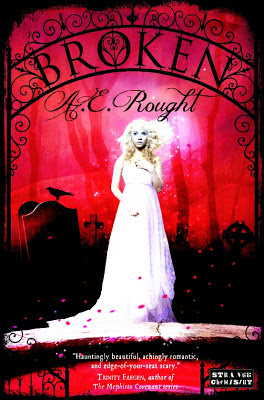 I have to admit something. I don't like classic retellings. I'm sorry, but I don't. I usually hear those words and run for the hills, screaming. If it's a retelling from a different character's point of view or a sequel/prequel, then I can take it. But a retelling... no. Sorry, but no.

After reading Mister Creecher by Chris Priestley for my book blogger pal, Emma from Book Angel Booktopia (not read the review? Are you sure you want to read it? ... fine, here's the link), I decided to stay away from all retellings for a while. And I have a few of these in my To Read pile. So, when Amanda from Strange Chemistry emailed and asked if I would be interested in reading an ARC of Broken, I was unsure, but replied saying I was intrigued.

And so, I got the book and when my other half (aka PIW) said I should read this out of the 3 ARCs I have to read before January, I risked it.

After the shocking death of her boyfriend, Emma isn't coping. Six months has passed and she's just as broken now, as she was when Daniel died in her arms. She can't seem to move on. She walked the local cemetery, knowing full well that his body isn't there. When she tries to move on, she meets newcomer Alex Franks. She's intrigued over their instant connection, as if she's known him all her life. He's strangely familiar, from the way he knows how to open her locker when it sticks to the way his eyes looks so much like Daniel. And Emma's beginning to live again. Live and fall in love again. But, all the while, a small voice in her head is telling Emma that there is something very, very wrong with Alex Franks...

Now, as I say, this is a classic retelling. Of Frankenstein. But this didn't feel like a retelling. With most retellings, it feels like you had to read the original before the retelling to "get" the story, but with Broken, that feeling didn't come... It was relief. I think we all know the outline of Frankenstein, but it was great not to feel like "You MUST read Mary Shelley before you read this!".

I really liked this book. Yes, I have some teething problems. Ok, let's get them out of the way first. Chapter 1. Yes, the first chapter. I read it and, after finishing it, I went "Huh?" and reread the last page to make sense of it. Was Emma having some kind of mental breakdown in this chapter? My brain couldn't understand it. It took several chapters before I went "Oh! Now I get it now...!". My second issue isn't the author's fault, it's the publisher. I've said this once before (with Witch Eyes by Scott Tracey, if I remember correctly) but here we go again: publishers, DON'T REVEAL TOO MUCH ON YOUR BLURBS! There's info and clues on the blurb which aren't talked/discovered till the last quarter of the book.

Rant over. Now the positive. 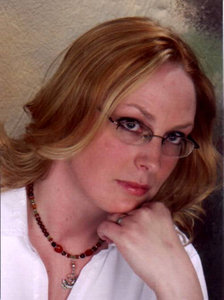 This book is slow. I know some of you guys will go "No! No, don't like slow reads" but here, the book's slow pace works. We get this gothic feeling because of it. We get the feeling of foreboding that something's not right with Alex, but we don't know whether to trust this as Emma is still grieving over Daniel. And because of the pace, you take your time to know the characters. Some are more instant than others (for example, Alex's father and Josh...) but it feels rare to have a YA book recently that takes its time with the story and with the answers to questions you ask in the early chapters (though I know some of you will go "The ending felt rushed"... I disagree on this).

Also, the book is very clever. At the start of the book, some of you will go "Oh. They have a connection and they only just met. Twilight, anyone?" but when you get to the end of the book, you go "Oh! OH! That's why! How did I not see that?!" And it has moments of genuine creepiness. Both of these (and oh, Alex and Emma...) will make you turn the pages, speeding forwards towards... now that would be telling.

I know some of you guys won't like this. I get that. But I like this. A lot. I am now very intrigued over what AE Rought will write next for Strange Chemistry...