Oh, hello! Today is the day where Brigid Kemmerer can reveal the cover for the fourth book in the Elemental series. And I am one of the few who is very honored to show you the new cover. And as someone who is getting into the series, the reveal is quite exciting for me. So, here is the cover and a summary for Secret. TA-DAH! 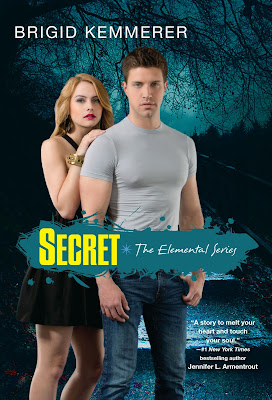 Nowhere is safe. Not even home…

Nick Merrick is stretched to the breaking point.

Keep his grades sky-high or he’ll never escape his hometown.

Keep his brother’s business going or the Merricks will be out on the street.

Keep the secret of where he’s going in the evenings from his own twin—or he’ll lose his family.

Keep his mind off the hot, self-assured dancer who’s supposed to be his “girlfriend’s” partner.

Of course there’s also the homicidal freak Quinn has taken to hanging around, and the Elemental Guide counting the hours until he can try again to kill the Merrick brothers. There’s a storm coming. From all sides. And then some.

Nick Merrick, can you keep it together?

So... what do you guys this? I am VERY intriguied over the cover as it is so different from the others in the series (this includes the Novellas). For a start, we have Quinn on the cover and no signs of the Merrick brothers or Hunter. The background is different from the others (we have an actual scene, rather than smokey mist). And, unlike the other covers, the title isn't written in white but in yellow. Are these clues?

Let the fandom rip the cover apart for clues and over the fact Brigid has revealed that Secret is her most steamiest book to date. BRING IT ON!!!

This book will be released in January next year. For more information, please go to Brigid's website at http://www.brigidkemmerer.com/.

But what is your reactions to the cover? Do you like it? Do you hate it? And will you demand that I get my rear in gear and read Storm and Spark?
Posted by Pewter Wolf at 14:00:00