eBook Review - You Will Not Have My Hate 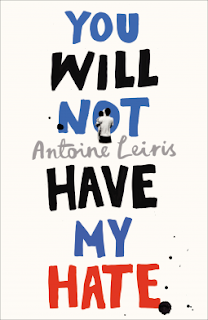 This, I am going to admit, is going to be hard to write. I'm not 100% certain where to start, truth be told.

Last year, Paris came under attack by a small group of terrorists. Antoine was at home, looking after his young son when he started getting text messages, asking if he and his wife were ok. He was fine, his baby was fine... but his wife, Hélène was out with friends at a music concert. Hélène was one of the people who died that night.

Three days later, Antoine wrote an open letter to his wife's killers on Facebook. He stated to them that he would not let himself or his 17 month old son cower or be defined by their acts. That his son will insult them by his happiness and freedom. That they will not have either his or his son's hate. The Facebook message went viral and this memoir follows both Antoine and his son, Melvin, in the days that followed.

I am going to admit that this isn't my normal reading. This is so far removed from my normal reading, I can't even really tell you why, when I got the email from NetGalley, I rushed there and requested it. This felt vital to read.

This isn't an easy read. This is a short novel, with short chapters (as Antoine describes it later in the memoir, these chapters are like polaroid shots of those days, touching on some events but not all), but I found reading them difficult. I would only read a few pages - maybe a chapter - before having to put my kindle down. This isn't an easy read - the event is recently, it's fresh in everyone's mind and with events that have recently happened, it feels more closer to the bone than ever.

But, saying that, there is a hopefulness to Antoine and his son's story. Yes, what they went through those days and the days/weeks/months/the year that followed and the future to come is hard and painful, but there is hope. There is hope, joy, love, kindness in the world and, no matter how dark the world is, we still have these elements and we must treasure them with every fibre of our being.

Antoine says he started writing this after Hélène's death to cope, and because of this, you can feel the rawness to it. And the fact this is felt through the translation work of Sam Taylor is beautiful.

Not everyone will like this book, but it is important to take the themes - hope, kindness, love - can carry them with us.
Posted by Pewter Wolf at 16:00:00

Email ThisBlogThis!Share to TwitterShare to FacebookShare to Pinterest
Labels: Antoine Leiris, Kindle, NetGalley, Random House, reading, review, Sam Taylor, Vintage, You Will Not Have My Hate