As you guys know, I blitz the whole Sin Eater's Daughter trilogy the early part of this year (Sin Eater's Daughter in January, Sleeping Prince in February and The Scarecrow Queen in March). And I really liked this series, with Scarecrow Queen being my favourite. And I remember chatting to Melinda at one point, going "You should write a small collection of short stories set in this world." 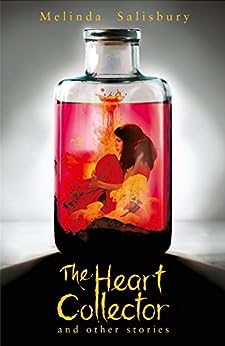 This must have been in the works because, a few months later, a small ebook collection of short stories set in this world was published!

The Heart Collector is a collection of three short stories set in the Sin Eater's Daughter world. We have two that have been released on the Waterstones's website for a limited amount of time - The King of Rats and The Heart Collector - and a third being published for the first time in this collection - Mully No-Hands.

All are prequel stories and you don't need to have read these to enjoy the trilogy. I want to make this clear before I go any further, explain what each story is.

The King of Rats is the story of when rats plague the city of Tallith and what triggers events that will reshape the world in centuries to come. The Heart Collector is a story of the Bringer who must wake and bring a girl to the Sleeping Prince for, one day, one girl will wake him from his slumber... Mully No-Hands is a fairy tale of a boy who has a beautiful mother and a rich father, who is destined to live a fairy-tale like life. But not all fairy tales end happily ever after...

Now, I have already read King of Rats (write-up for that is here) so I just jumped into The Heart Collector and Mully No-Hands. But out of the three stories, I enjoyed The Heart Collector the most. This story, I wished, was written as a standalone novella, almost in the same vein as The Second Short Life of Bree Tanner by Stephenie Meyer. I feel that this would stand up on its own, but add extra insight into the Sin Eater's Daughter story as this follows a different character.

This collection is very much for fans of the series and it adds an extra layer to the world.
Posted by Pewter Wolf at 07:30:00