Why, hello Internet! No, don't panic. This blog isn't going to spontaneous combust like that character from Bleak House! No, it's a clever pun (well, for me anyway) of a title as I would like to welcome Aaron Starmer onto the Pewter Wolf!

Aaron is the author of Spontaneous, a story which follows Mara who is having a dull senior year at school. Until Katelyn Ogden explodes during third period. That's right. Katelyn spontaneously self-combusts. And she's the first. Teens are exploding left, right and centre. And with no-one knowing what's causing these teens to explode, Mara just wants to know if she's going to make it to graduation. It's going to be one hell of a year, but Mara is going to try and figure out how to stay alive, but also discover that falling in love might be the worse thing she could do...

Doesn't that sound NUTS?! I can't wait to find time to read this! Plus, with this being developed into a movie and John Green (oh The Fault in Our Stars fame) giving this book high praise, I need to find time soon! Because of this, the lovely Claire at Canongate asked if I would like to ask some non-spoiler questions to Aaron and I jumped at the chance!

Before I hand you over to past me and Aaron, if you wanna check Aaron out online, you can go to his website at aaronstarmer.com, or check him at on Twitter at @AaronStarmer!


What would be your elevator pitch for Spontaneous?
I don’t need an elevator. I can pitch it at a stoplight, or even while passing someone along the street. Because I just have to say three words: “Spontaneously combusting teenagers!” After hearing that, I think you’re either in or out. 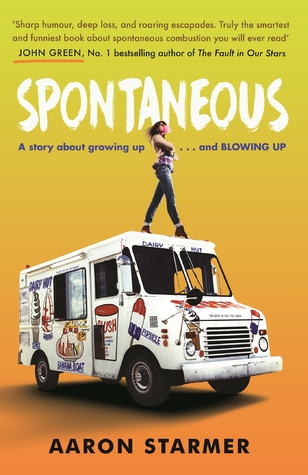 What inspired you to write this coming of age story?
There’s something particularly poignant about the last year of high school. It’s the end of one of the only true communal experiences that most people will have in their lives. And I wanted to explore the joys and anxieties that go along with that. The narrator is a smart and somewhat jaded seventeen year old girl named Mara, and the focus is on her and how she’s dealing with the fact that not only is high school ending, but her classmates are randomly exploding. But I think the things she questions are pretty universal. What sort of regrets will she have after she graduates? What will happen to her friendships? What does being an adult really mean? What if she randomly explodes?

Where did the idea of spontaneous combustion teens come from?
The idea of spontaneous combustion has been around for ages. Charles Dickens wrote about it (Bleak House!!!!). But I’d never seen it in a young adult novel before. I thought it was the perfect (and obvious) metaphor for that last year of high school, when the end feels so close. Also, when I was a teenager, the built-up hormones and frustrations often made me feel like I was going to explode at any moment.

How did you find the balance between gore and humour?
It may sound counterintuitive, but the key was to go extreme with the gore and the humour would follow. Typically spontaneous combustion is depicted as someone catching fire. But I wanted explosions full of blood and guts because it’s so shocking and absurd that the natural reaction is to laugh at it. Plus there’s no suffering involved. A character is there for a moment and then—Pop!—gone. Finally, it helps that Mara can crack jokes to diffuse the tension. So when a spontaneous combustion happens, you may be laughing, but hopefully the emotional resonance comes later when you see how it affects people.

When you were writing this, were there any points you wondered if you should tone scenes down or tone them up?
I did tone a few spots down a bit (no spontaneous combustion during a sex scene, for instance), but for the most part, it ended up how I originally envisioned it.

One of the people who praised your book is John Green, author of The Fault in Our Stars and Looking for Alaska. How did you feel when you first found out he had read your book?
I was thrilled, of course! Who wouldn’t be? I’m a big fan of his work and I realized after I had written Spontaneous that his work had inspired it. There’s a line in The Fault in Our Stars about how the main character feels like a grenade that’s about to explode. That’s basically Spontaneous in a nutshell.

To wrap this up, sum up reader’s reactions of Spontaneous in one word?
Whaaaat!?!
Posted by Pewter Wolf at 07:30:00