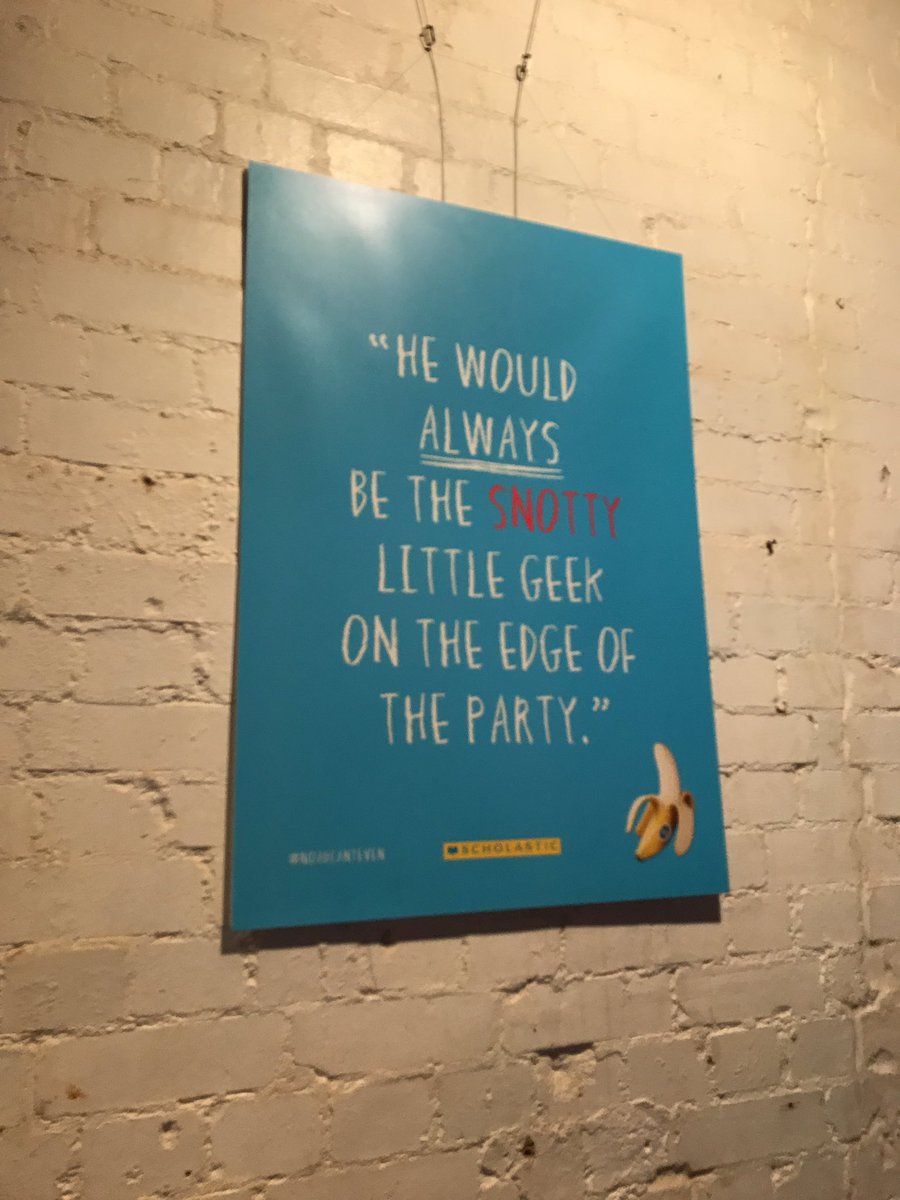 Last Wednesday, in the secret heart of the theatre area of London, a small book launch party was thrown. This is the launch party of Simon Can't Even by Simon James Green. And it was filled with family, friends, book publishing people, people from that glittering world of theatre and TV...

... and me. [insert the awkward here. No, wait. Insert that picture to the right now!]

Thanks to the lovely people at Scholastic (who will never invite me to anything again. See further down for reasons), I was invited to come to this launch party and, for once, I realise that I could (moved departments at work). So, out of work, changed into normal human clothes, popped onto train and, was shocked to discover that I had time to spare in London. I could pop into Foyles bookshop and have a snoop at the pretties (and, even though I should be saving money due to rent, I treated myself to a copy of The Invasion of the Tearling by Erika Johansen. So, guess what I'll be reading soonish... maybe...). Then, once I figured out where the launch party was being held (very close to Harry Potter and the Cursed Child and Aladdin! And not that far from The Mousetrap [if you've read Simon Can't Even, you know why I reference that!]), I went in and discovered...

...bananas. Quite a few bananas. Not real bananas (because fruit is healthy and that is not allowed on this blog!), but inflatable toy bananas. Because we need any more reason to be a filthy-minded lot. (If you haven't met any YA book blogger/vlogger/person, our minds live in the gutter!)


Anyway, a ton of people came. And, because I am writing this several days later than I normally do, I can't remember. Sorry. I know Charlie from @charlieinabook was there & I know Neil from Foyles was there (@devilslibrary - I was in Foyles earlier, how did I miss you?!) but, after that, my memory is useless. Sorry if you were there and I chatted to you! (Plus, they gave me white wine. People [and Andrew], never give me wine at an event like this. I never have time to eat beforehand... let's just say that and move on, shall we?)

Moving on from the wine, after everyone turned and had a glass of drink in hand, Simon did a small speech, thanking the people who helped Noah into being and read a small extract from chapter 2 for us. Now, I recorded bits and pieces on my Twitter & Instagram, which will embed into post once I figure out how! Give me a sec...

SNEEK PEEK OF #NOAHCANTEVEN!!! @scholastic_uk @simonjamesgreen
A post shared by Andrew (@thepewterwolf) on May 3, 2017 at 12:20pm PDT

#NoahCantEven do a list of 3 evil war crimes ... though Reason 2... I SO would have done reason 2 if I was a smarter/vicious teen in when doing GCSE Food Tech (@simonjamesgreen @scholastic_uk)
A post shared by Andrew (@thepewterwolf) on May 3, 2017 at 3:58pm PDT

Just so you know, I'm not finished with the pictures and the videos so brace yourselves.

After that, we had a surprise. Somehow, Simon smuggled in three singers who have worked on the musical Jersey Boys to sing some 80s hits (blame Noah's Gran. But she does has good taste in music) and, after that, sing songs featured in the musical (Walk Like A Man, Can't Take My Eyes Off You to name two songs - again, my memory is awful!). Again, I got video and photos of these. And it would be rude not to share, right?


After that, people mingled, chatted, I cornered Simon and a few people from Scholastic (his editor Linas, publicity officer Olivia and other people, all of whom are lovely and I kinda want a job there. They seem like a scream to work with!) and tried to get info about book two out of them while getting my copy of Noah signed. Oh yes. I have no shame! None. I could blame it on the wine - but what would be the point? I WANT A BOOK 2 OF NOAH, DAMNIT! But after joking with them about what might be in the book (and the cover! HOW ARE GOING TO BEST THE COVER FOR BOOK TWO?!), am a little scared of what Simon might have put in there. I think, at one point, I mention swan porn & something about quiche (NO IDEA WHY! IT MUST HAVE BEEN THE WINE AND THE TINY CUPCAKES!) and heaven helps us all if those are in there. But I did ask if there will be kissing in book two. That's all I want. A bit of sexy kissing. Is that too much to ask?

After that, I left everyone to enjoy the rest of the night. I had train it home and work the following day. But I want to thank Simon and everyone at Scholastic for inviting me to come to the event and I can't wait to see people's reaction to Noah Can't Even and will be waiting for news on book 2...

Oh, some people have photos of me at the event. WHO KNEW?!

There is a photo of me with Simon somewhere. I don't think it will see the cold light of day. I probably look like a startled puffy fish and Simon probably looks like a stud muffin. I didn't see the photo so no idea what we looks like. If it does pop online, will share...

EDIT: FOUND IT! Thanks Linas for tweeting this!!!