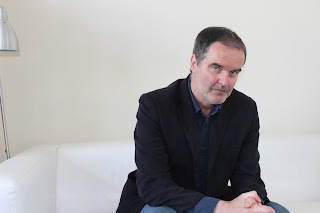 Today is my stop on the Dr Jekyll and Mr Seek tour! So here we are!

Now, the plan was to get a review of the book itself up on time (and I still hope to do so but in a seperate post - FINGERS CROSSED!). But, I am very honoured to have Anthony O'Neill on the Pewter Wolf and asked a few non-spoiler questions about Dr Jekyll and Mr Seek.

I won't talk about what the book is about (I ask an elevator pitch question so wait, dear reader), but Anthony is author of several books, such as The Lamplighters, the Empire of Eternity and The Dark Side, which 20th Century Fox have bought the film rights to and has Oscar-winning screenwriter Steven Zaillian attached to produce.

Before I hand over to past me asking Anthony questions, I just want to thank Anthony for taking time out to answer my questions and Lina at Black & White Publishing for allowing me to take part in this blog tour!

Now, onto the questions and answers!


What would be your elevator pitch for Dr Jekyll and Mr Seek?
“Seven years after Mr Hyde is found dead on the laboratory floor, a stylish gentleman shows up in London claiming to be Dr Jekyll. Only Mr Utterson, Jekyll’s lawyer and confidant, knows he must be an impostor because Jekyll was Hyde. Or is he? This is my floor, thanks.”

What was it about Dr Jekyll and Mr Hyde that spoke to you to write this sequel?
It’s very elegantly written, beautifully textured and metaphorically rich. I’d be overjoyed if someone found a lost sequel written by Stevenson himself – the whole world would be. But in the absence of that possibility I just had to do it myself.

This book tackles possible identity thief. Why decide to tackle this issue?
The original book is about the duality of man and I wanted to continue the theme of identity with a more modern obsession. Actually, the original title of the book was The Fortress of Identity – a phrase Stevenson uses in his book. On a more practical level, I toyed with a few possibilities for continuing the story and identity theft seemed the most logical. 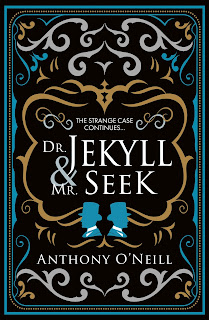 How did you find the right balance between writing a sequel that, while respecting the original, stays apart?
It would be foolish to replicate Stevenson’s prose style exactly, partly because I couldn’t do if I tried, and partly because – even if I did – it would look very forced and self-conscious. Stevenson was a poet and a lawyer and his style is very grandiloquent. So I did just enough to look complementary while retaining aspects of modern writing, which tend more toward variations in pace and heated dialogue exchanges.

As for the substance of the book, I’d like to think that Stevenson, as a very rational man, would be approving of the way I found a way to continue his tale while questioning the veracity of the more outlandish aspects.

Is there any classic gothic novels that you would be tempted to write a prequel or sequel to? If so, why?
I’d like to do a retelling of Dracula from the point of view of Dracula – a very enlightened man so fed up with the hysteria and superstition of Transylvania that he escapes to England … only to find that it’s just as hysterical and superstitious. I think that’s a very fertile theme, even in the twenty-first century.

Last question: who is Mr Seek? And where did his name come from?


In Stevenson’s original, the lawyer Mr Utterson calls himself “Mr Seek” when he’s investigating the mystery. “If he be Mr Hyde, I shall be Mr Seek.” I have a weakness for puns but I didn’t make this one up!
Posted by Pewter Wolf at 07:30:00