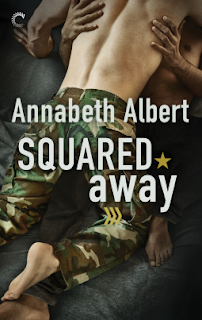 Like I said yesterday, am having a genre reading slump/wall so I decided that, the next few reads I do should be outside my comfort zone. I should read something fun, silly and fluffy. Not "Pick My Next Read" as I didn't want to put pressure on people just in case I DNFed it.

So, I remembered vaguely that I requested an adult LGBT romance on NetGalley from an author I tried out once before and went "This. I kinda want to try this", so that's why I read Squared Out, even though I am not a huge romance reader.

After the news of his sister's and husband's deaths, SEAL Mark has to come home to act as guardian to his two nieces and nephew, all under the age of five. What he didn't expect is to come up against Isaiah, who is determined to file for custody. But Mark remembered that last time they met six years ago, Isaiah was young, wild and gets bored easily...

But Isaiah is determined to prove Mark wrong. Isaiah has been there for the family while Mark was away on missions and he's determined to keep the kids together, no matter what. The kids are the most important thing in this situation, not Mark's fears or Isaiah's now dead crush on Mark.

But as the legal situation tries to sort itself out, the two start developing attraction for each other... but unless one of them can open their heart and speak, they both could lose what's important...

I power-read this over the course of three days when I was off work and it was such a lovely distraction. It was light, fluffy, sexy, a Happily Ever After ending (the publisher has said on their site that they publish happily ever after [HEA] or happy for now [HFN] endings), everything I needed at the moment. So, this book came out the right time for me.

What I found interesting is that one of the characters used LGBT terms I have never heard of - demisexual and ace-grey - and it was fascinating to read a character who identified as demisexual and understand this more. I do wish that there was more information on this, though, as when I first heard of it, I did a Google search to get a basic understanding on it, but it's nice to see other sexual identities being talked about here.

This is a beach read for me, a story I switched my brain off to while reading, but I had such a good time reading this, and I am open to trying out another Annabeth Albert story - not sure if it will be in the series or another, but I'm up for the idea.
Posted by Pewter Wolf at 07:30:00