Hell, this isn't weird or intimidating. Nope. Not at all! [insert nervous laughter here]

Ok, let me explain why I'm writing to you. I was asked by the lovely Eve at Simon and Schuster a few weeks back if I wanted to be involved in a blog tour for a book called Dear Martin, written by Nic Stone. It felt like a sign when I got the email as it was the fifty anniversary of your death (sorry to be morbid while writing to you) and, in the book, the main character writes letters to you after he is arrested by an off-duty white police officer and, after the event, something happens involving another white police officer, and we see how the main character copes with everything that happens.

Which means I should write about the Black Lives Matter movement. Or gun control in the US. Brexit. The current US President. How we're killing the planet. Issues within the LGBT+ community. Why we want superheroes in our lives, now more than ever. The environment. I could research your life and your legacy as well as other inspiring people. I could write to you. about anything. Anything.

Ok, there's a show I used to watch - I still dip in and out of it from time to time. Grey's Anatomy. Anyway, there's a line in one of the early seasons that I keep thinking about every now and again. Maybe because I'm a dark person, maybe because I like how true this sentence is, or maybe because I'm so jaded with the grown-up world around me. The quote goes like this:

"We all remember the bedtime stories of our childhood. The shoe fits Cinderella, the frog turns into prince, Sleeping Beauty is awakened by a kiss. Once upon a time, and then they lived happily ever after. Fairy tales, the stuff of dreams. The problem is, fairy tales don't come true. It's the other stories. The ones that begin with dark and stormy nights and end in the unspeakable. It's the nightmares that always seem to become reality."

A few years ago, I would have said this line was rubbish. It was true for some people, up to a point, I would argue. But it's not true to everyone.

It's seems weird that I feel like this. So unsure of myself over something that, a few years ago, I was strong-minded about. And in some cases, changing your mind is the right thing - you learn new things, you mature and you try and be a better person for it.

When I was a child, like most kids, everything was black and white. Right and wrong. It was so clean-cut. But as we grew up, the line blurred between them and it all got tangled and messy. And when we were kids, it was so easy for us to say "That's wrong. Stop that." whereas now as an adult, we're more shy about it. We're more quiet about speaking out, especially when the other person is, for one reason or another, more powerful or louder than you.

So, how did you do it, Martin? How did you stand up and call out injustice, even when the world was trying to disagree with you? What makes you remain standing out and continue to say "No, this is wrong"? 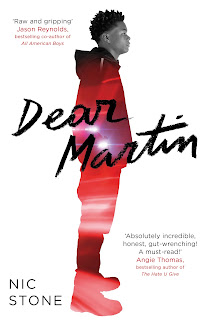 I ask this as over the past few years, the world feels darker somehow. Things happen and it feels so out of anyone's control that to have a person say "This is wrong" or "I've made a mistake and I must correct it", it feels like shouting into a void.

And I know what you would: one voice can change the world. And I do believe that. But it's hard, sometimes, when you look at the world and you see the evil and cruelty in it.

Maybe that's why we have to keep going. Keep standing up and keep shouting into the void. But the world is a bad place, but over time, little by little, it will get better. It will be kinder. I mean, compared to where we were 50 years ago, we're improved so much. We still got a way to go, but we're trying, we're getting there. We'll break that glass ceiling and if we hit it in the same spot, over and over again, someone will break it and won't be scratched by glass.

Sorry for my rambling. I didn't mean for this letter to go this way. But writing this (then rewriting it several times over to get the thoughts out right - well, for it to make sense to me!) has oddly been helpful!

Thank you. Will try and keep standing and keep shouting.