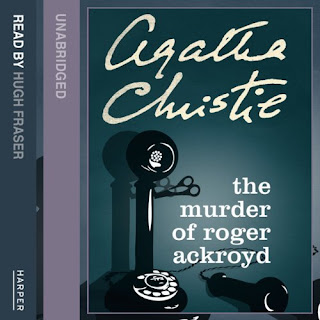 Well, I am going through a bit of an Agatha Christie blitz, aren’t I? First I read The Mysterious Mr Quin (a collection of short stories I’ve wanted to read back at the start of July but only chatted about on here at the start of the month) and, at the time of writing this, I am reading The Mystery of the Three Quarters by Sophie Hannah, which is taking Agatha Christie’s Hercule Poirot and putting him in a new adventure (with the blessing of the Agatha Christie Estate, of course). So, I was around 40% into Mystery of the Three Quarters and I was having such a blast with it, I went “You know, I kinda want to read more Agatha Christie stories. But where do I start?” So I oooh-ed and aaah-ed and, in the end, I bought two audiobooks - The Murder of Roger Ackroyd and And Then There Were None - and went “Ok, let’s try one out!”. On sheer impulse, I went with Roger Ackroyd.

Roger Ackroyd knew too much. He discovered 24 hours earlier that the woman he was in love with and planning to propose to had poisoned her first husband, only for her to kill herself after revealing another dark secret: someone is blackmailing her. And after receiving the evening post, he discovers a letter by the woman, with the truth of who was blackmailing her. But before he could read it, he’s violently stabbed in the neck.

The family and friends are in shocked - who could do such a thing? And why?
This is one of Agatha Christie’s well-known and well-loved mysteries and, though I have only audiobooked it now, I was aware of who the killer was and the last shocking twist. Like all my other write-ups on here, no spoilers. But what I found fascinating was the clues, was seeing how Agatha Christie laid everything out - all the clues and all the red herrings - and going “Ooooh! There’s no trick here! She never lied to the reader. She told the truth” and that I found fascinating.

I listened to the audiobook over the course of two days (over four hours on one day and under 3 the next) so I powered through it. I did try and keep the characters straight in my head, but I must confess, I did get one or two of the male characters muddled on a few occasions, so I think if I had read it, I would have slowed down and kept it all straight in my head.

I really liked Hugh Fraser being the narrator of this audiobook and his voice seemed to fit the setting of the story. I know that Hugh Fraser played Hastings in the ITV adaptions of Poirot so it means sense to have him read the stories (I believe he has read most while David Suchet - who plays Poirot - reads a few others. Including Murder on the Orient Express). There’s something about his voice and the way he reads this which just fits. Am kinda glad that I have got the audiobook of And Then There Were None has a different reader - Dan Stevens - as I might have worried that I wouldn’t click with his reading. At least, this way, I have a clean break.

While there were little things that bugged be (the language - which is very much of the time it was written so I forgive that), I did like this mystery and I get why people respect this as one of the crown jewels from the Golden Age of Crime. I’m kinda excited to read/audiobook the Agatha Christie’s I have (And Then There Were None on audiobook and Appointment of Death on my kindle) and I hope to read/listen to at least one before the year is through…
Posted by Pewter Wolf at 07:30:00