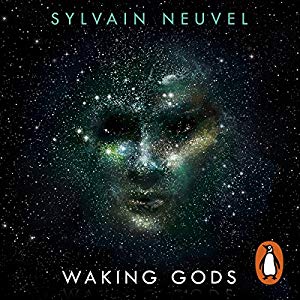 Earlier this year, I listened to the audiobook of Sleeping Giants by Sylvain Neuvel, the first book in the Themis Files (my write-up for that is here, FYI), and since then, I wanted to listen to the second book in the trilogy to see where the series goes.

So, when I got a credit on Audible (I preordered an audiobook so I had to wait a month or so), I bought this and went “Ok, hopefully, I’m going to enjoy this as much as I did the first!”

Set around ten years after the events of Sleeping Giants, a giant alien metal robot materialise in the centre of London. There was no warning for its arrival. It stands alone in London, stock still. As if it’s waiting… And it looks frightening like Themis.

Doctor Rose Franklin can’t remember what happened to her. According to what she’s been told. she died several years ago and yet, here she stands, with no memory of what happened to her. As she, her team and Themis’s pilots try and figure out what to do next, a military decision backfires, reducing in half the city of London being destroyed!

Now, with more alien robots appearing all over the world in cities, it’s a race against time as, if no-one can figure out what these robots want and a way to stop them, over 99% of the human population is going to die…
Ok, let me admit this straight from the get-go, I didn’t love it as much as I did with Sleeping Giants. To me, Sleeping Giants felt more, to me, like a political thriller with a big twist of sci-fi thrown in the mix. Whereas with Waking Gods, this felt more like sci-fi with a twist of political thriller.

I do want to admit that, the first day I was listening to this, I had really bad hay fever (blocked nose, painful sinus, headaches, lack of sleep) so I really didn’t connect with this story till I was a good two/three hours in. This might be way I am more on the side of “I like this, but I didn’t love it”.

Ok, let’s get the good out first. I love the audiobook version of these stories - you have a huge cast of actors playing characters so it felt more like an audio play than a audiobook, and with the style of the trilogy being told in reports, interviews and diary entries, this gave the story an extra texture and I am grateful for that as I believe that, if it was only one reader, it would have been confusing to listen to. And yes, while there were a few actor changes with some characters, it still gave that richness.

I also liked the last few hours of the audiobook. Everything was going to a point and it felt more action-packed. It was edge of your seat listening with its twists, turns and I didn’t feel that coming moments, and this is great. After I finished Waking Gods, I wanted to jump straight into the third and final book of the trilogy.

However, there were things that made me go “…erm…” over. Like I said before, I wasn’t feeling 100% when I started this so I think I was more critical about it but I do have issues with the start of the story and certain elements. Because of the time gap between the end of Sleeping Giants and the start of Waking Gods, I couldn’t fully get on board till a few hours into the audiobook. Yes, I get why the time gap was needed as I have listened to the whole story, but I couldn’t help (for a while) feeling that Sleeping Giants was meant to be a standalone (yes, the ending of Sleeping Giants makes it perfectly clean that it was never a standalone), but I got that vibe from it. And there were several elements/storylines that I just didn’t get on board with. I liked how the storylines evolved and changed my mind, but when I figured some of them out, I felt… it’s hard to explain. Like i said, I get why these storylines were needed and why we needed the time jump, but there were moments I did fee a bit “… oh? You’re doing this…?” and while I went along with it, I always thought that it felt a little too easy.

I don’t know if that makes sense or not. If it did, great. If not, sorry about that.

So, will I continue and complete the trilogy with Only Human? Weirdly enough, even though there was a huge cliffhanger, I feel ok leaving the series here. Yes, there were multiply times I went “I need to see where this is going to go!”, but after finishing the audiobook and giving myself a few days think it over, I feel ok staying here. This trilogy has been one crazy ride that I have enjoyed hugely, but I feel ok to leave it here and try a few more different stories. Maybe I will come back and finish the trilogy off - I’m pretty sure that I will, just because - but I feel in a good place with this trilogy.

So, Waking God. While a good second instalment in this trilogy, I prefer Sleeping Giants more. But hey, everyone has a different opinion so I will be super intrigued to see what you guys think of the series if you’ve read/listened to it!
Posted by Pewter Wolf at 07:30:00