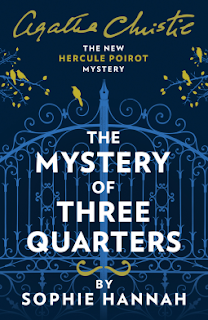 I’ve had a bit of a bad run of authors writing new adventures for classic characters. I like that new audiences are discovering these well-loved characters, but recently, when I read these new advertures, I seem to hit a wall over liking the story.

So why, I hear you ask, did I want to read this? Because I wanted to. Well, I wanted to read Closed Casket, the second in the new Hercule Poirot mysteries. I even got an copy to read, but got super chicken over it so never read it. But with this, I went “I want to try this. Plus, the premise sounds super intriguing and very Agatha Christie. And it’s an author I’ve never read before.”

Poirot comes home from lunch to find an angry woman standing in his doorstep. Here, she demands to know why he sent her a letter, accusing her of murder. Poirot has not sent any letter, has no idea who she is nor the person who was murdered. The woman doesn’t believe him and, shaken, Poirot goes into his house, only to come face to face with a man who’s son has received the same letter from Poirot.

Over the next 48 hours, two more people comes to Poirot, saying he has written these letters to him, accusing him of murder. But Poirot doesn’t understand why these four unrelated people are accused of murder by someone pretending to be him…

Who is Barnabas Pandy who these four are meant to have murdered? Was he murdered? Who is the poison letter writer? And can Poirot find the answers before more lives are put in danger?

Where do I start with this?


Before I go any further, I want to make it clear that no-one can write an Agatha Christie mystery expect Agatha Christie. She has her own quality, so I can’t compare Sophie Hannah to Agatha Christie as these are two very different crime writers. Plus, half way through Three Quarters, I did audiobook The Murder of Roger Ackroyd and And Then There Were None and I saw instantly how different these two authors are.

Now, the Three Quarters. The best way to tackle this is splitting the book in two halves.

I had such fun with the first half. The premise was intriguing and I had a blast with Poirot, Catchpool and trying to figure out if this was a murder or a poison pen letter, something we haven’t really seen Poirot tackle (though I think this was touch upon in a Miss Marple - The Moving Finger?). I whizzed through the first half of the story and it was because I had such fun, I audiobooked Roger Ackroyd and And Then There Were None.

But the second half… this is where the story fell flat to me. It became a struggle to read. It lost the fun of the first half and became an overly complicated crime novel. It didn’t feel like a Poirot mystery. It felt like the story was trying too hard to be too smart. And because it became so complex, I wondered “if we removed Poirot, I don’t think anyone would noticed. It doesn’t have that special Poirot-ness to it anymore.”

Plus, there were several occasions where the chapters flipped from being third person to first person (with Catchpool narrating) and this was jarring. I didn’t like this and wished it would stick to one style or another.

So, how do I talk about this? It didn’t blow me away like I hoped. Because of the ending and how it dragged/messy it became, I wouldn’t be rushing out to buy it. But I don’t want to abandon this series completely. I do want to try another Sophie Hannah story with Poirot or maybe one of her own novels. I am leaning towards Closed Casket, but am more wary of it now. But I do want to try one more time… but I think I might dive into another Christie before I do and, when I do, give myself distance so I’m not trying to compare…
Posted by Pewter Wolf at 07:30:00