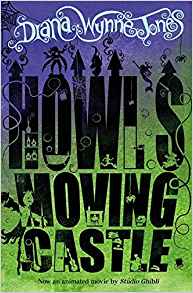 It’s been a while coming. Yes, I’ve only got round to reading this, a classic within fantasy, I know. I am very behind the times, I know.

So, down to business. Where do I begin with this?

In the land of Ingary, Sophie Hatter finds herself in trouble. After catching the unwanted attention of the Witch of the Waste, Sophie is now under a spell where she now is an old woman. Thinking she has nothing to lose, she makes her way to the moving castle that belongs to Wizard Howl, a vain wizard who, they say, have an appetite for the hearts and souls of young women who fall in love with him…

But once in the castle, she meets Howl’s young apprentice, Michael, and Howl’s fire demon, Calcifer and Sophie realise that she might not be the only one under a curse…


Ok, have you guys ever been super excited to read a book, only to be really disappointed or let down?

I hate to say it, but this is what happened to me with Howl. I was so certain I was going to love this, but within a few chapters, I realised that this wasn’t going to happen so, instead of doing my now-normal DNFing it, I decide to keep going. I wanted to know what happened and if my opinion of this would changed.

This is one of those “It’s not you, it’s me” books. There is nothing wrong with this book that I could see. There were moments in here I read and went “Oh yes, I see why so many other people love this” and then I would go “Then why aren’t I?”.

Ok, I will admit I have seen the Studio Ghilibi film and I enjoyed it hugely, but I don’t think that changed my thoughts of it. I found it fascinating to see the edits and changes the film made from the book (the film is loosely based on the book. The word here is loosely!).

I think what upsets me about not liking Howl is that I really enjoyed reading one of Diana’s other books, Charmed Life, the first book in her Chrestomanci series and I plan to read the rest of this series throughout the course of 2019 and 2020.