#re3 - Quidditch Through the Ages 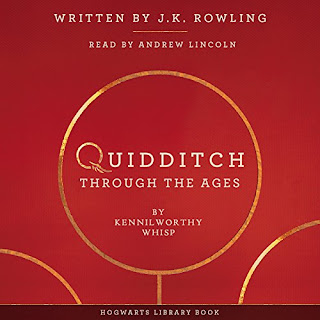 Ok, this is a #re3 for me. Of course it is, it’s Harry Potter related! But I have never listened to the audiobook version before so not sure whether to class this as a review for the whole audiobook or just for the bits I haven’t read, but this audiobook has extras that aren’t in the book edition.

So, for those of you who don’t know: Quidditch Through the Ages was first referenced in the Harry Potter series as one of the books the characters read from Hogwarts Library and, back in 2001, JK Rowling published this and Fantastic Beasts And Where To Find Them (another Hogwarts text book) to raise money for the charity, Comic Relief. Several years later, while continuing to raise money for Comic Relief, money also went to JK Rowling’s own charity, Lumos.

Which, at the time of requesting the audiobook from my library audiobook app, I didn’t know the extra content was there. I saw it and went “Why Not!”

Ok, I am a huge fan of the Harry Potter series. You guys know this about me. And while I do have issues over the latest Fantastic Beasts movies (don’t get me start on my issues over Crimes of Grindelwald! Maybe I will wrote a blog post over this one day… but it would be a rant and a half so will need a good few days to write it!), I have a soft spot in my heart for the original books and the textbooks that came out.

I feel I have to state that as… well… for some reason, I didn’t warm to this audiobook.

I think I know why, but let’s talk the positives. The extra content.

The extra content is easily accessible on Pottermore after a quick search but hearing this extra content being read by Imogen Church (as Ginny Potter) and Annette Badland (as Rita Skeeter) was delicious! Though, I forgot how much as a ****stirrer Rita was. The extra content was wonderful!

However… the rest of the audiobook… well… ok, there’s nothing wrong with it. I have read it before so I know what I was getting into. But… ok, don’t hate me. I didn’t like Andrew Lincoln reading this.

Have you guys ever listened to an audiobook and you got “Oh, you do not fit reading this!”? Well, that’s what I had with Andrew Lincoln. There’s nothing wrong with him - I have seen him in movies and TV Shows (not Walking Dead as I hate zombies and can’t do horror!), so I know he’s a good actor. But, for some reason, I found him and some of the sound effects kinda jarring. And I don’t know why!

Plus, I can’t understand why a three hour and a ten minute audiobook should cost £12 on Pottermore and Audible. Yes, money from this purchase goes to charities, but I have bought cheaper audiobook which have been longer and still donate profits to charity. I fear the word “cashcow” might be used here (though JK Rowling has said she is getting no royalties from this as the royalties are going to Comic Relief and Lumos).

So, while I did enjoy the extra content but I’m not sure on this audiobook.
Posted by Pewter Wolf at 08:00:00