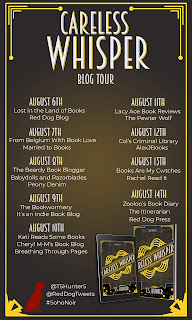 BLOG TOUR ALERT! And yes, it's a bit of a side-step and yet, so completely on brand for me that, when I heard this blog tour might be in the works, I did a lot of twitter begging to be involved!

So, let me get all the info out of the way and talk to y'all about Soho murder!

The third instalment in the Soho Noir series (I have the first and second on my kindle and hoping to read them over the summer or as part of my Murder Month this coming September... keep your eyes peeled for that) takes readers to 1986 Soho, London where lead singer of the popular boy band, Loose Lips, is struggling to stay in the closet while the band is going through a messy breakup.

TV Runner, Joe Stone, is assigned to Adam during a behind-the-scene, warts and all expose of the group recording their final album.

But when the band's manager, Jack Eddy is found dead in Adam's hotel room, the Police instantly think it was a sex game gone wrong and Adam is the primary suspect. But Joe doesn't think so, and turns to his former policeman and flatmate, Russell to help clear Adam's name.

As the two investigate what could have happened, Russell is waiting. Waiting for some test results, which could change his life... 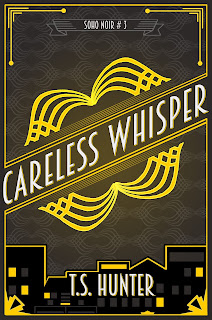 Well, I had a blast reading this over the course of one summer weekend!

This is a fast paced read with several good twists and characters who aren't always what they seem to be. I could have very easily devour this and the previous books in one day as I enjoyed spending time with both Joe and Russell, as well as the new characters being introduced, which I think are going to become more important as the series goes on.

Like I said, this is the third novella in the series (apparently, each cover colour is going to be a colour from the Pride flag), and while the previous cases were reference, it didn't effect the fun I had while reading this. I do wish this was a little longer as I did enjoy my time with Joe and Russell. But good thing I have the previous two instalment to keep myself busy and with the wonderful mix of LGBT+ characters and 80s music, I can't wait to return to this series, in the next few weeks!
Posted by Pewter Wolf at 08:00:00