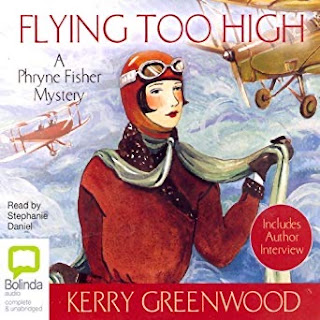 Another audiobook that I listened to while during Believathon (I really should have prepped myself much better but I had to wait till it was available), and it’s another cosy crime. I seem to enjoy reading/audiobooking crime stories, as long as I click with it.

And after listening to my first Phryne Fisher mystery - Murder on the Ballarat Train - back in October, I wanted to do another. I was torn between this, the second in the series, or Death at Victoria Dock, the fourth. This came available first so nabbed that.

Phryne Fisher likes a thrill. Flying a Tiger Moth plane and walking the wings of one in full flight should be enough excitement for some people, but not Phryne. Now becoming a private investigator, Phryne finds herself involved in trying to solve a murder, save a child from kidnapping, all while having young, attractive men at her door… Sometimes, a woman’s work is never done.


Again, like with Murder on the Ballarat Train, this was fun. I enjoyed myself listening to this story, though I do think this is might be a little forgettable like Murder on the Ballarat Train. And, again, this is a nice cosy mystery set in 1920s Australia, though now I’m typing this up, I realise how dark one of the topics reference actually is.

But the main thing that works for this series so far is Phryne herself. She’s smart, fashionable and isn’t afraid to have her way with men (though this would be frowned upon in 1920s). But Phryne feels like a very modern lead character and how she handles sex, sexism and homophobia is very modern. For example, a character reference how beautiful the male body is then goes “I don’t like men that way” and Phryne isn’t shocked and distressed over this flippant talk of being gay. And with sex… she sleeps with two very different men. One of which is meant to be engaged, but they understand on the subject is made crystal clear.

Though, I am going to say that I can easily see that Phryne’s character might grate on some people as, at times, she could come across as overconfident and a tad cocky, but I find that it works for her. On any other character, I would have a problem, but I think because Phryne is aware of this and uses it as a weapon at times, it works for her.

I do understand this series might not be everyone’s cup of tea. However, I had fun with this and I do think I might another Phryne Fisher in the future (I think I will do a later mystery in 2020).
Posted by Pewter Wolf at 07:30:00