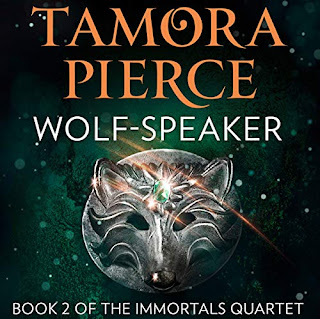 Last year, I went through a huge blitz of getting advance reader copies of Tamora Pierce’s novels via NetGalley. And I only read Wild Magic. I liked it (will put link to my write-up here) and I had plans to read the second and third (Wolf-Speaker and Emperor Mage) in the series soon after as I got them as well as her newest novel, Tempests and Slaughter. And I somehow didn’t get round to it. I just lost track of time. Earlier this year, I audiobooked First Test, the first in another quartet by her, Protector of the Small (link for that is here). After audio booking and again, liking it, I decided that if I want to continue with that series, I really should try and finish the ARCs I have and, maybe even completing the series somehow.

But it’s been nearly a year, could I pick up the story of how Wild Magic ended and Wolf-Speaker begun…?

Daine has wild magic. She can talk and sway the actions of animals. So when Daine is summoned by a pack of wolves who saved Daine’s life years ago, she goes without thinking, taking her mentor, the legendary mage Numair. They travel to the Dunlath Valley, but both are shocked at the danger that awaits them. The animals and humans of the valley’s lives are in danger as the valley’s rulers have been blinded by greed and power, and they plans to overthrow the king must be stopped at all costs…


I kinda wish I discovered Tamora Pierce when I was younger and in the depths on my Harry Potter obsession. I feel that, if I had, I would be obsessed with all her series, in the same way I am with Garth Nix, who I discovered while the world is waiting for Order of the Phoenix.

But, I have discovered her now, as a thirty-something. Even though I’ve know her name for YEARS (but not read her due to the Fear as she sounds like A Big Deal), it’s one now I’ve gone “Am reading her now!”

Like I said, I wish I discovered her sooner as I have fun listening to this. I find that, with this and the previous novels I’ve read or listen to that her female characters are interesting and refreshing in the world of fantasy. It feels like she paved the way for strong, interesting, complex female leads within the genre.

Am going to be honest now, while I did like this, I sense I liked Wild Magic and First Test more. There feels like there’s more of a plot, whereas this felt… I can’t explain it, but I didn’t engage with this in the same way as the previous two. I wonder if it’s a bit of a filler book, where ideas and characters are introduced to set-up the later books in the series.

I did like this and I do plan to continue on my Tamora Pierce reading adventure in the next few months, but this doesn’t feel as strong as First Test or Wild Magic, but I do think this is setting something up which is going to be important.
Posted by Pewter Wolf at 07:30:00