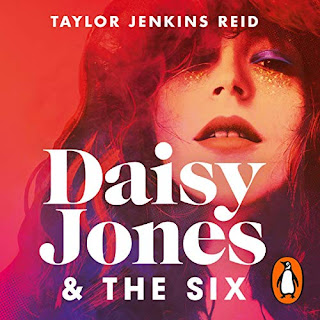 Ok, before I go further, want to state that I listened to this last month while doing Believathon so, I decided to put this up now so I don’t get muddled. So, December is going to be a bit of a mixed-bag of books/audiobooks from when I read/listen to them. Plus, with Christmas and New Year round the corner, am going to squeeze them in as much as possible, so sorry in advance for the blog post overload.

Now, we have housekeeping out of the way, Daisy Jones. As you know, I audiobooked The Seven Husbands of Evelyn Hugo and thoroughly enjoyed myself with it. I'm thinking of relistening to this in the New Year. And I audiobooked Evidence of the Affair and I liked that a lot. So, going into this, I was excited that it would make a good, if not great, read. Plus, everyone I know who had read this has loved it, so high hopes.

In the 1970s, Daisy Jones and the Six were rising stars in the rock n roll scene! Their album, Aurora, is rising high in the charts and their tour is selling out. Then, on 12th July, 1979, the seven break up, halfway through their tour. But no one knows why…

Who knows the truth of what happened that day and the events leading up to it? Daisy Jones, the brilliant songwriter but high functioning drug addict? The egotistical Dunne brothers who control everything the band does? The angry guitarist? The binge-drinking dummer? The Bassist looking to the future? The keyboardist who won’t fit into her gender role? Or the frontman’s wife, who knows that one wrong step from her husband can result in him falling off the wagon or that the connection between him and Daisy is electric?

There’s never one side to the truth.
Well…

Ok, I want to say one thing before I go on. The cast on the audiobook is phenomenal. It’s the same with the other two audiobooks of Taylor Jenkins Reids I’ve listen to. I can’t fault them.

But the story itself… I’m sorry, but I felt kinda let down by it.

Don’t get me wrong, I did like this, but it fell flat. It didn’t have that sparkle that Evelyn Hugo had. It didn’t wow me in the same way.

All the characters are flawed (which I liked), but I only ever really connected to three characters and their situation: Karen (the keyboardist), Graham (the frontman’s brother) and Camila (the frontman’s wife). I liked Karen and Graham and their relationship. I like how it was tackled, the what happens when two people have great chemistry but want very different things. But Camila was my favourite character. I loved being in her company and I wished the story was told more from her point of view, if not entirely. I would have liked to have read from her, being inside the group’s inner workings but still on the outside, watching…

The oral history works and doesn’t. It’s great to hear the characters tell the story and hear each person’s version , but because of this, you never know who’s version of events to believe. An example is between Daisy and the frontman, Billy. Several times, an event happen and each side would tell the event eversoslightly different. Daisy would say she left first and Billy would say the opposite. And when you’re trying to like these two and this kept happening, it’s hard to connect and find an in with them.

Plus, the issue of addiction. I liked how this was handled and didn’t, at the same time. At the start, we see Billy spiral into drink and drug addiction, so much so he was forced into rehab. I liked how this was tackled, but after that… I didn’t. Daisy was always popping pills and mixing her drug use. It felt like she was always mentioning it when she spoke. We have other characters who would talk about drinking and sex and then we have Billy, talking about relapsing and using Camila and their family to stay sober. Because this was mentioned so many times, it felt normalised (which to them, it was), but I got frustrated over it. And Billy using his wife and kids as a reason to stay sober, I got annoyed after a while, going “So, what would happen if she left and took the kids? Or she dies? You can’t use them to stay sober. You have to stay sober for yourself”.

Plus… it’s wasn’t very rock n roll. yes, they took drugs and had sex. But that was it. No TVs thrown through windows, no cars driven into the pool, no dealings with the Police. Compared to stories we’ve all heard from bands we grown up with, they were tame and, to be honest, a tad bland.

I know I am one of the minority over this. I did like this, but it misses several things that would have made it a wow read, like Evelyn Hugo. Because of this, I’m now wondering if I rated Evelyn too low on Goodreads…
Posted by Pewter Wolf at 07:30:00