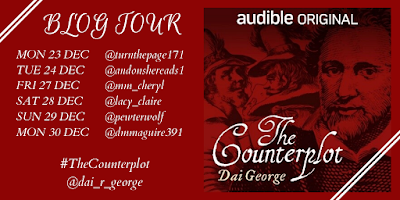 This is going to be my last post of 2019! And what a nice post to have as this is part of the blog tour for Dai George's The Counterplot, an Audible Original!

The Counterplot follows Ben Johnson, a contemporary to Shakespeare in London 1603. But Ben has fallen on hard times and in desperation, writes a satirical play. Only for it to backfire hugely and he finds himself in prison with his reputation in ruins.

When he finally leaves jail, he decides to return to his estranged wife, Anna. But Anna isn't the same woman Ben left when he went out to seek his fortune. His absence and the deaths of their three children has led Anna to become friends with some very passionate Roman Catholics. Scared for his wife, Ben becomes entangled with these people and their dangerous plan to overthrow the King. The Gunpowder Plot is brewing...

If you want more details about this audiobook, check it out on (of course) Audible, but I am thrilled to welcome the author, Dai George on the Pewter Wolf with a small Q&A. No spoilers, but hopefully, these questions and answers will wet your appetite!

Before I hand you over to our Q&A, want to thank Dai for finding time to answer these (this time of year is insane!) and a small thank you to Anna at Midas PR for asking if I wanted to be involved in this tour. Now, if you want to say hi to Dai, check him out on Twitter at @dai_r_george!

Now, ONTO THE QUESTIONS!!!

Thank you for coming on the Pewter Wolf. What is your elevator pitch for The Counterplot?
Thanks for having me! The Counterplot is a novel about the playwright Ben Jonson and his struggles to establish himself (and survive) in a tumultuous year in English history - the year of the Gunpowder Plot. It follows Ben as he wheels and deals in the London theatres, lands himself in prison for writing a seditious play, and then almost ends up in deeper trouble again as he becomes entangled in the plot through his estranged wife, Anne. It's a story about love, faith, danger and ambition, and it immerses you in the full panorama of Jacobean London, from bricklayers to Shakespeare's company, to the highest ranks of court.

What inspired The Counterplot?
In the first place, a class I took when I was studying at Columbia University with the great Shakespeare scholar, James Shapiro. We were doing a class on the year 1606, and more than Shakespeare, the character who kept cropping up and snagging my attention was Jonson. He seemed to just have this incredibly dangerous and exciting year. He probably should've been hanged about three times, but somehow he managed to escape that fate and launch himself to new peaks of fame with his greatest play Volpone - so I just wanted to work with that story, and figure out how it might have happened.
In terms of novels, my major inspiration was Hilary Mantel - her Thomas Cromwell gave me something to emulate, a way of modelling an early modern mind and making it come alive on the page. Incidentally, there are quite a few biographical echoes between Cromwell and Jonson: both were working class boys made good, and both could handle themselves in a fight if they had to. But Ben - my Ben, at least - is a louder, more raucous and comic character, I think. Following where he led, the story started to take on colour from another of my big influences as a novelist: Dickens. 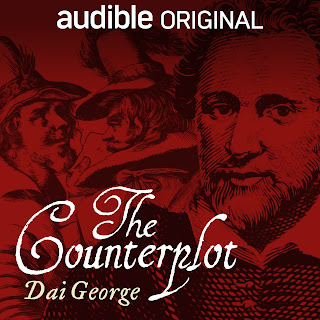 How much research did you have to do while writing The Counterplot?
Quite a bit. There were long days in the British Library to begin with, but I was lucky in having a couple of key books that could keep me company and keep me (more or less) on the historical straight and narrow. One was Shapiro's own 1606, which came out about halfway through the writing of my book. Another was James Travers's Gunpowder, which stands out as one of the most impartial and useful books in the crowded market of Plot history. And then there were several biographies of Jonson, the most comprehensive and up-to-date of which is Ian Donaldson's, though I actually found myself returning to older, more impressionistic accounts - I didn't want to feel too bound to academic credibility when I was fleshing out my main character; I wanted to retain some ownership of him. I remember an editor reading an early draft of the novel and saying, 'You have to try to forget some of your research to make the story breathe.' That advice has stuck with me.

The Counterplot is an Audible Original. How did writing this compare to your previous works?
Well, it's my first novel - my only previous book is a poetry collection called The Claims Office, so there are obvious, elementary differences at the level of genre. The scope of writing fiction is so different from that of poetry - it's a long-term, structural project, with a lot of boring (and sometimes satisfying) grunt-work, whereas poetry usually happens, for me, in between other things, in strange little moments of inspiration and heightened attention. They're both equally challenging and rewarding, but in vastly different ways. I hadn’t thought specifically about the format all that much, but when I heard what my great editor at Audible had to say about his vision of the novel, I saw immediately why it might work in audio. It's a novel full of different voices and atmospheres - an evocative novel, I hope, and one that translates well to audio narration.

As this is an Audible Original, what did you think when you first heard The Counterplot being read by the narrator, Harry Myers?
I've got to say, I was absolutely delighted. Harry's an amazing voice actor, and when I was sent some options of different readers to consider, I listened to his tape and just thought, 'That's the one.' Among many other things, he did the Audible Dickens Collection, and I love how he's drawn out that Dickensian energy that's lurking in my novel. His range is absolutely incredible - you wouldn't know it from listening to his 'narrator voice' (which is in a rich and delicious RP) but he's a London boy himself, so his grasp on the working-class voices that we find in Ben's family and on his street is just spot-on. He gave the whole thing a jolt of electricity.
Posted by Pewter Wolf at 08:00:00