Audiobook Review - Murder At The Vicarage 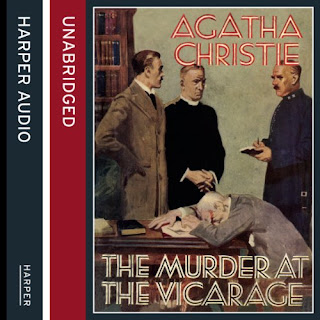 My first Agatha Christie of the Year. And I am planning to read a lot more (I have … hang on, let me check my Goodreads To Be Read list … six.) Hopefully, I will try and read them all this year. I want to read more crime/mystery books this years as well as a few other genres. But getting away from the point, my first Agatha Christie of 2020 and my first, real Miss Marple novel.

And while I do have one Miss Marple on my kindle - Sleeping Murder - and I do keep wondering about two or three other titles, I keep hearing this is a good place to start with Marple. So, when I saw just before Christmas that this was on a One Day Deal on Audible for 99p, I jumped at it, only to hesitant a little.

Why, I hear you ask? Because I have tried to read a sampler of the book on my kindle multiply times and I can never seem to get past the first few pages. I just don’t click with it. But I hoped, when I decided to press play, that I would just go with it and hopefully, I would get it as I went.

“Anyone who murdered Colonel Protheroe would be doing the world at large a service!” Careless remark from the parson to his wife, only his words come back to haunt him when he discovered the Colonel, shot in the head, in the vicarage’s study. The people of St Mary Mead are shocked: who could have done such a thing? The wife? Her lover? The Colonel’s daughter? The newcomer whose past is a mystery? The doctor? The parson himself?

But living in this picturesque English village lives one Miss Jane Marple, and she has her own thoughts on the murder…
I am in two minds over this. On the one hand, I get why everyone really likes this Christie novel. I do. But on the other… well, I feel a tad underwhelmed by it.

Like I said, I was listening to this while at work over the course of 3 days (on the second day, I listened to over 6 hours of it) so I might not have given it my fullest of attention. Plus, while I love Richard E Grant, I wasn’t such a fan of some of the choices he made to character’s voices and the way certain characters spoke.

Like I have said many times, a narrator to an audiobook can make or break an audiobook. Luckily, I warmed to Richard’s choices the further I went into the audiobook. The same goes with the last audiobook I listened to, The Long Call by Ann Cleeves.

But let’s chat about the mystery itself. I kinda figured it out - now, I’m not sure if it’s because I knew it from the BBC adaptation starring Joan Hickson (I don’t remember watching the ITV adaptation in December 2004 - plus, ITV’s MARPLE also included Marple in non-Marple stories such as By The Pricking of My Thumbs [this is a Tommy and Tuppence story, which is an odd story to pop Marple in. Plus, I’m certain ITV hinted that Tuppence might be an alcoholic (due to her husband’s success at MI6. She was going to join, but unable to due to being pregnant at the time), which is a huge licence of character - wonder how the Agatha Christie Estate/Ltd took to that!] Orderal of Innocence, Towards Zero, The Pale Horse [which the BBC is currently adapting now, FYI] Murder is Easy and other really weird choices!) or hearing the ending from a podcast (All About Agatha, me thinks), but I went “Oh, I see a trick Christie uses so it must be this!”. It didn’t take the fun away - you’re trying to spot the real clues from the red herrings (like I did with Murder of Roger Ackroyd, And Then There Were None and Murder on the Orient Express), but there was something about knowing this time that made me not like the story much. 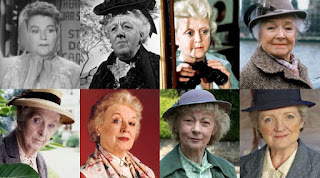 Don’t get me wrong. I love Jane Marple and, over time, I grew to like the Vicar and his wife. But some of the characters (one character is called … wait for it … I kid you not, LETTUCE!) and side plots are a bit… well… they weren’t my cup of tea.

I do wonder if this is because on some Agatha Christies, I love how she sets up the murder and how she solves it and, in others, I just love the set up to the murder but not the way she wraps it up (a good example, to me, is Appointment with Death and, if I remember from my youth reading, Third Girl and Cat Among the Pigeons. All had interesting set-ups, but the resolutions were… well..)

But then, I wonder if this is because I was listening to this while at work so couldn’t give it my full attention. Plus, I know there’s another edition read by Joan Hickson and I wonder that, if I listened to that version, I would enjoy this more. I know she has done a few more Miss Marple audiobooks as well as Emilia Fox, Stephanie Cole and Richard E Grant did one or two others…

While this might not be the case for me, I am going to read more Christie this year…
Posted by Pewter Wolf at 07:30:00