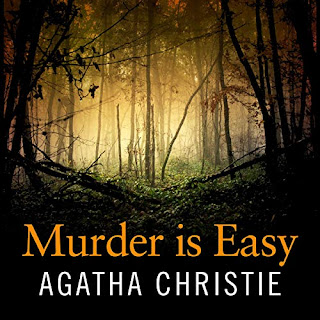 One of the main Agatha Christies that I would like to read in 2020. I’m might not sure if I am going to succeed in my challenge, but ha-ho. Let me try!

So, Murder is Easy is one of Agatha Christie’s lesser known novels (no Poirot or Marple here). Instead, we have a standalone that starts in a super “grabs you by the throat” way. Well… it did for me.

Luke Fitzwilliam is on the train when he starts talking to an elderly woman, Miss Pinkerton. She’s going to London to go to Scotland Lane as she believes a serial killer is at work in her small English village of Wychwood. And she believes the local doctor might be next…

Luke doesn’t believe her, so is shocked the next day when he reads about Miss Pinkerton’s death in the newspaper. She was a victim of a hit and run. A coincidence, surely? But it’s too much of a coincidence when, a few days later, Luke reads about the death of Dr Humbleby of Wychwood…

I had such high hopes for this! SUCH HIGH HOPES!!! And yet…

I feel really disappointed. It’s not a bad book, but it’s not what I was expecting.

This could be split into two parts. The first half is Luke going to Wychwood and asking questions, making notes and thinking. And after reading the first chapter were is gripping, it’s a bit slow and boring. I get why - I see what Agatha was doing with this novel, don’t get me wrong - but as someone who likes their crime to have a bit of pace and punch, to go from a gripping first chapter to this slowness doesn’t work for me. There were two or three times when I was in the first half when I considered DNFing it. I cancelled my library request of The Last Seance due to it (plus, had too many audiobooks out via BorrowBox so small blessing. Might grab this again near Halloween)

And then, strangely, the gear shifts in the second half. I think it’s because Luke’s actually investigating. He’s looking into things and is being a little more pro-active and this works for me. I like characters to have agency. So, to have Luke do something works. I have a few other Agatha Christies so I’m not put off by reading them, but am going to be very selective over what I read next…
Posted by Pewter Wolf at 08:00:00