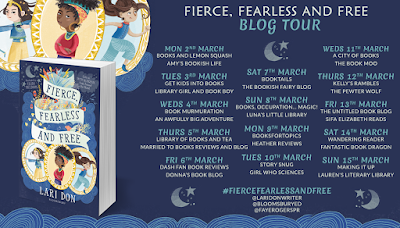 And we are dealing with the fierce, the fearless and the free in this blog tour (see what I did there?) with Fierce, Fearless and Free by Lari Don. Here, we have a collection of myths and legends from all over the world, where the princess didn't wait for the prince to save her. Rather, she saved herself...

I love a good myth and seeing as most myths I know of are gods acting like f***bois, it's nice to see cool, fierce and fearless women come to the forefront. And I am thrilled that Lari Don has come along onto the Pewter Wolf with this guest post for the tour!

So, before I hand you over to Lari, I just want to thank her for finding the time to write this post for me and for Faye from Faye Rogers PR for asking me to be involved in this tour!

Now, if you want to say hi to Lari, you can do so by either popping to her website - laridon.co.uk - or tweeting her at @LariDonWriter. And if you want to know more info about Fierce, Fearless and Free after reading Lari's guest post, you can check out Bloomsbury! Now, over to Lari! 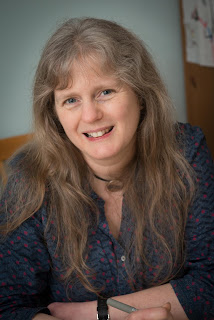 I have a confession to make. I CHANGE stories as I tell them. Ancient myths, venerable legends, old folktales. I change them to fit my voice, my sense of story, the audience, the setting; I throw in references to current affairs, the weather outside, or that sudden crash in the school corridor.

Storytellers have always changed stories. If a travelling tinsmith or tailor regularly told a tale about an angry giant chucking stones around, on any particular night they would set that story on the closest hill to the village or farm they were visiting. That’s why we have similar stories based in so many different places. And the reason those stories are similar but not exactly the same, is because everyone who has subsequently told the story has made small changes to it.

It’s vital to respect the cultures that created these stories, but it’s also important to recognise the changing nature of oral tales, and a privilege to be part of the evolution of these stories.

When I tell a story in a school or a library or a cave or a castle, I preserve the heart of the story – the crucial element that drew me to the story – but I change other elements of the story, to make it pacier, more logical or more relevant to the audience.

Sometimes a child will say: ‘I know that story, but you told it differently!’ Which can prompt a discussion about how stories are passed on, and making a story your own.

This is most likely to happen if I tell a version of a story that feels familiar. Then the kids may be noticing changes which happened centuries ago, when the story I’m telling and the story the audience know diverged. 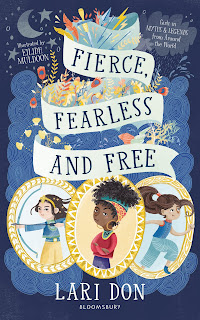 For example, I love the Italian folktale Petrosinella, about a long-haired girl trapped in a tower, who escapes when she finds three magic acorns hidden in the tower. Kids often say: ‘But that’s the story of Rapunzel, and it doesn’t happen like that!’ Then we chat about whether German Rapunzel and Italian Petrosinella might be cousins, and why long-ago storytellers might have made these changes. (I’m very glad they did change the story, because the chase scene involving Petrosinella’s acorns is great fun to tell!)

The story we may think of as the ‘real’ version of a traditional tale – often the one we read as a child – is just one of many versions. There is never just one ‘correct’ ‘authentic’ version. An oral story on the printed page is just one telling, captured at one point in time, at one stage of the story’s evolution, in one storyteller’s voice. And looking at traditional tales in that way gives young writers and storytellers the confidence to play with the old stories, and create their own versions in their own voices. It gives us all the confidence to be part of these stories’ evolution.
Posted by Pewter Wolf at 08:00:00