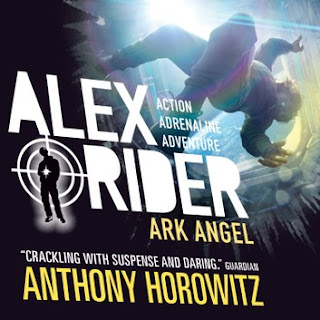 Reread Time! I did warn you guys that this year, seeing as 2020 will be my tenth year of book blogging (October, I believe), I did want to do some more past reads, whether that be something I chatted on the blog before or something from my youth. And I have been failing that. Oh well… but not for long…

I first read Ark Angel when it first came out in April 2005 (NO ONE DO THE MATHS TO FIGURE OUT MY AGE!) and I remember very little about it. But I always had plans to go back into the series and reread some of the earlier books in the series and read the books I skipped. Been thinking this on and off since I read Never Say Die back in 2017 (Really? 2017?!). So, this year, on a random moment, I looked at my BorrowBox app and saw the series on there, I went “Oh, I really want to relisten to the second Alex Rider, Point Blanc, as it’s my fave and the TV adaption is based on this”. And then, one day after I DNFed another audiobook (wasn’t in right mindset for it. Am planning to go back to it one day), I was skimming it as none of my audiobooks I bought appealed to me and I saw Ark Angel was available to download instantly (the others I had to request and wait). So, on impulse, I requested and listened.

After the shock ending at the end of book 5 in the series, Scorpia (I REALLY need to reread this. It’s such a goodie!), Alex is recovering in hospital. But he’s not going to recover for long as the body in the hospital room next door is going to get kidnap, Alex does a switch and gets himself kidnapped instead. Eco-terrorists Force 3, led by Kasper, are gunning for the boy’s father, Nikolei Drevin, one of the world’s wealthiest developers and the man who is single-handedly funding the first luxury outer-space hotel, Ark Angel. Alex manages to escape and, as a thank you for saving his son’s life, Nikolei offers Alex a holiday to rest, relax and becoming friends with his son, Paul…

But the more time Alex spends with Nikolei, the more he feels uneasy around him. Something’s not quite right, and Alex might not be out of the spying game like he hoped…


As you know if you follow me on social or read an earlier paragraph, I do like this series and I do plan of rereading a few Alex Riders (Point Blanc, definitely. Maybe Scorpia and Never Say Die) and reading some I haven’t (am gonna keep those under my hat for a while, but I am planning to read upcoming Alex Rider, Nightshade), but this is one of the books in the series in which, back then and even now, I feel is very much a “jump the shark” book, and I think most fans feel the same way. 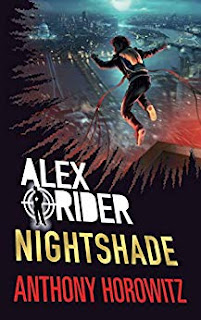 I mean, the book ends with Alex being forced to go into space. BONKERS! It’s Moonraker (the film, not the book) for kids!

But I forget that they are elements in this book that, at the time, most have seems a far-off dream and yet, now, in 2020, they seems almost reality. Space travel (SpaceX and Virgin Galactic), millionaires buying football clubs, eco-terrorism and other aspects that feel a little too close to the bone with the UK news over the past few years (there was one scene that my brain flashed to Greenfell and I felt hugely uncomfortable, even though the situation in Ark Angel was so far different, I shouldn’t have made the connection).

There are moments that did feel a little slow when audiobooking this. But I think this is because I was listening to this at work most days so could only do an hour or two here and there… most the time, though, the book and plot felt taut. A little off the wall in some places (again, ALEX WENT TO SPACE!) and some of the choices the narrator made with character voices was… er… interesting. Not awful, but just not what I was expecting.

But it was nice and fun - and I do think the Alex Rider series is fun read - and I am looking forward to do a few more Alex Rider novels (and maybe one or two other Anthony Horowitz novels) throughout the course of 2020.
Posted by Pewter Wolf at 08:00:00