Bit late to the party as on mini-break but HERE NOW SO SHARING NOW!!! 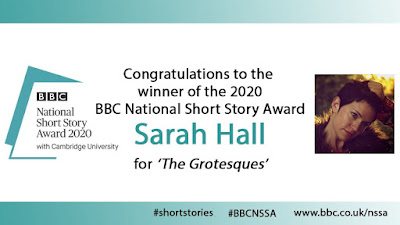 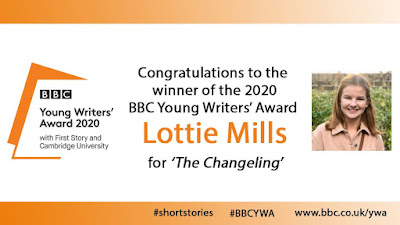 SARAH HALL
BECOMES FIRST WRITER TO WIN
BBC NATIONAL SHORT STORY AWARD TWICE
www.bbc.co.uk/nssa #BBCNSSA #ShortStories
Four-time nominated Sarah Hall has won the fifteenth BBC National Short Story Award with Cambridge University (NSSA) for the second time with ‘The Grotesques’, a ‘timeless and unsettling story’ set against a backdrop of privilege and inequality in a university town. Exploring themes of powerlessness and privilege, dysfunctional mother-daughter relationships, covert control, identity and scapegoating, the judges praised Hall for her ‘extraordinary’, ‘layered’ and ‘masterful’ writing and cited her second time win as ‘recognition of her standing as the country’s foremost writer of short stories’.
The first double win in the Award’s history, the news was announced live on BBC Front Row this evening (Tuesday 6 October) by 2020 Chair of Judges Jonathan Freedland in a special programme celebrating 15 years of the Award. ‘The Grotesques’ is available to listen to on BBC Sounds and appears in Hall’s latest collection Sudden Traveller, published by Faber in 2019. Its titular story was also shortlisted for the Award in 2018.

Chair of Judges, journalist and author Jonathan Freedland commented:
“In perhaps the strongest field in the history of the BBC National Short Story Award, Sarah Hall’s story still stood out. A timeless, unsettling story rendered in exquisite prose, ‘The Grotesques’ yields more with each reading, offering layer upon layer of meaning. It is the work of a writer who is not only devotedly committed to the short story genre but, has become a master of it. Sarah Hall has now won this Award twice, recognition of her standing as this country’s foremost writer of short stories.”
Sarah Hall, winner of the 2020 BBC National Short Story Award with Cambridge University, said:
“I’m stunned to have won. No one expects to repeat a shortlisting, let alone be honoured with an award like this twice. It’s an incredible privilege and reward. And with this prize comes a tremendous amount of support for the form itself - from tenacious, passionate advocates at the BBC and Cambridge University, to expert judges, and the writers who continue to innovate, experiment and create astonishing, vital, questioning worlds within stories. We can see from this year’s shortlist the diversity and range showcased. In the hands of these writers, over only a few pages, so much is possible and words become utterly potent. It’s hard to turn a good story, it requires the compression and alchemy of so many aspects, ideas, details, experiences and observations. I truly love the form, its disproportionate power, disquiet and refractive metrics, its ability to stir the reader or listener, even, at best, to overturn our secure notions of who we are and what we believe. There are days when we are lost, when not much makes sense and answers to the vexing human question seem impossible. On those days nothing is as companionable as a short story. That goes for writing them too.”.

Twice nominated for the Man Booker Prize, Sarah Hall previously won the BBC NSSA award in 2013 for ‘Mrs Fox’. She was further shortlisted in 2010 and 2018. The award-winning author of five novels and three short-story collections, she was born in Cumbria and lives in Norwich.

Di Speirs, Editor of Books at BBC Audio and judge of the Award since its launch said:
“There are few writers who make even the shortlist more than once. In one way this reflects the wealth of talent writing in the UK; in another it shows how very hard it is to consistently write new original short fiction and make it different, entertaining, gripping, provocative, again and again. 15 years ago, we began this award hoping to reward the writers who –- against the odds and fashion and publishers’ preference for a novel – not only persisted but revelled in taking up the particular challenges of short fiction. To keep writing really excellent short stories requires audacity, invention and practice. So I’m particularly delighted that, from a brilliant shortlist, Sarah Hall, a virtuoso in this field, sees her long service in the short story game recognised again.”
Hall beat stiff competition from an extremely strong shortlist that included established and new voices, comprised of: 26 year old British-Ghanaian writer and photographer Caleb Azumah Nelson whose eagerly anticipated debut novel Open Water is released in 2021; James Tait Black Prize winner Eley Williams; poet and newcomer Jack Houston and EU Prize for Literature for Ireland 2019 winner Jan Carson.

Established in 2005, the BBC National Short Story Award with Cambridge University was originally established to highlight a literary genre regarded as undervalued and under threat. Its aim was to recognise and celebrate the very best writers of short fiction who had no prize equivalent to major literary awards like the Man Booker Prize. 15 years on, the short story is in robust health and the BBC National Short Story Award is recognised as the most prestigious for a single short story with the winning writer receiving £15,000 and the four shortlisted writers £600 each.

Dr Midge Gillies, Academic Director, Creative Writing at the University of Cambridge Institute of Continuing Education, said:
“Sarah Hall’s unsettling short story takes a good, hard look at power structures and inequalities – not just in the fascinating mother/daughter relationship at the heart of ‘The Grotesques’ – but in the wider associations between the homeless and the entitled in an ancient university city. As a second-time winner, Sarah Hall proves, again, how adept she is at introducing us to fascinating new characters and the strange worlds they inhabit.”

Alongside the BBC NSSA, BBC Front Row also announced the sixth annual BBC Young Writers’ Award with First Story and Cambridge University, an award created to inspire and encourage the next generation of short story writers. Open to 13–18 year olds at the time of entry, it is a cross-network collaboration between BBC Radio 4 and BBC Radio 1. The award was won by Lottie Mills, 19, from Stevenage, Hertfordshire for ‘The Changeling’. Lottie was previously shortlisted for the BBC YWA in 2018. Her story is also available on BBC Sounds.
Posted by Pewter Wolf at 14:12:00