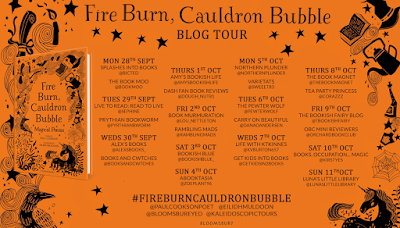 Double double, toil and trouble, fire burn and cauldron bubble...
Well, I had to start the month of Halloween like this, didn't I? I HAD to! And what real way to kickstart this month than to be involved in the blog tour for Fire Burn, Cauldron Bubble, to get us in the spirit of things (see what I did there...?)!
Fire Burn, Cauldron Bubble is an anthology of poems, featuring magic. Ranging from unicorns, dragons, witches, magic flying carpets, trolls, wands, spells going awry to nice (and not so nice) hauntings. With illustrations by Eilidh Muldoon and collected by Paul Cookson from a wide range of poets (including [takes deep breath] William Shakespeare, Lewis Carroll, Benjamin Zephaniah, John Agard, Valerie Bloom, Matt Goodfellow, Joshua Seigal and AF Harrold among others]), this collection of poems will get you in the mood for things that go bump in the night and ask for a trick or a treat...
I am so thrilled to be involved in this tour and I can not wait for you guys to read the guest post from Paul Cookson, chatting about poetry and why poetry is so important to him. It's an interesting post (and it comes from me who is a bit uncultured when it comes to poetry!)

Now, before I hand you over to Paul, I just want to thank Paul for finding time to write this post, and to Blue from Kaleidoscopic for asking me to be involved in this tour. Also, if you want to find out more about this collection (if case the post inspires you), you can check out Bloomsbury's website.
Now, over to Paul we go!
WHY IS POETRY IMPORTANT TO ME?
What a question? And so many answers!

Poetry has been important to me for a very long time now – over half a century ( because I am old! Not very old, just old! )

Daddy Fell Into The Pond by Alfred Noyes. Alfred Noyes also wrote the wonderful narrative poem “The Highwayman” but I loved the cartoon element in the title. Who wouldn’t want dad to fall into a pond? Always funny!

There are two other things about this poem. Much later in life I came across it again and it wasn’t quite how I remembered it :

Firstly, the illustration I remember going with it had a ladder against a tree, a cat sat on a branch looking down at dad in the pond. I always assumed that I’d forgotten this verse or detail from the poem. But it doesn’t day that in the poem itself. That’s the illustrator interpreting it.

Also I came across the line “the gardener suddenly slapped his knee” … the gardener? The gardener at our house WAS my dad and he was in the pond! It was then I realised it must have been quite a posh and well to do family – to actually have “a gardener”!

I’ve always liked words – whether pop song lyrics, puns and jokes, rhymes and poems and it wasn’t long before I started writing my own. These began as pop song lyrics ( I had a grand dream that I would be a singer with my own band! ) and most of them were “copied” or aped current songs in the charts in the early seventies. And they were mostly rubbish!

These developed into poetry when I started reading the poems of Roger McGough and Brian Patten in The Mersey Sound and saw John Cooper Clarke perform live. I suppose an easy reference point is to say that “Roger made me want to write poems and John made me want to perform them”. It’s more complicated than that but in essence that’s the truth. 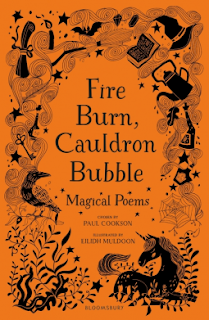 So, I’ve always written poetry. Firstly , just for myself – as a diary, an expression. Then, I started self publishing ( it was the era of punk and do it yourself fanzines – so I did it with a poetry pamphlet ) and selling them to friends and family. I wasn’t writing for children at this time – just me. That came later, when I had become a teacher and met a few poets who wrote and performed specifically for children in schools.

To be honest, I think that’s where I really found my voice as a poet. And where I honed my craft as a poet and performer. I love it when you try a new poem out in front of an audience and the laughs or the participation or the empathy happens in the right places – you find out quickly whether it works or not. Sometimes more-so when it doesn’t and you go back and work at it some more. John Cooper Clarke once said “If a poem doesn’t sound very good when you read it out loud it’s probably because it’s not a very good poem” and I love that. Even poems that I “don’t like” (ie the old ones about daffodils, etc) are brilliantly structured and written and sound better out loud.
I read poetry every single day – dipping into the many poetry collections in my study. I love reading other’s work and think “Wow! I wish I’d thought of that!” I get inspired by them and take my own ideas off into different directions. You’re never too old to get inspired by others.

I’m also writing every single day – especially during lockdown. It’s one of the few disciplines that I have kept going since March. A poem a day – published on Facebook, twitter, instagram  - responding to news, Coronavirus, family, feelings, football and more. It’s been good to exercise those poetic muscles on a regular basis. Sometimes they are funny and jokey, others more personal and heartfelt – but they seem to have connected with people and that’s what it’s all about really. Connecting. It’s no good writing poems that no-one wants to read.

Why is poetry important? It just is. That’s the simple answer. Three words. It just is.
Posted by Pewter Wolf at 08:00:00