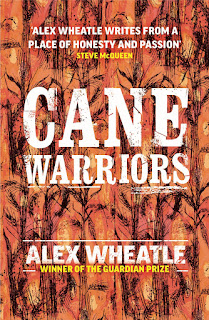 I HAVE AN EXTRACT FOR YOU GUYS!!!
Cane Warriors by Alex Wheatle follows Moa, who only knows the life of working on the Frontier sugar cane plantation in 1760s Jamaica. But Moa has learnt of an uprising, lead by the charistamic Tacky. Moa is to be a cane warrior, hoping to escape and help the fight for freedom of enslaved people in nearby plantations. But before he can do that, Moa and his friend, Keverton, must face their first task: they must kill their Overseer, Misser Donaldson...
I'm hoping to read this in the coming few weeks as I have read a few pages and it's GOOD, and I can tell it's going to be powerful and gripping. So, when Robert from Andersen Press emailed and asked if I wanted to share a small extract from the book with you guys, I jumped at the chance (Thank you Rob)!
Plus, this year and 2021 looks like it's going to be HUGE for Alex! Steve McQueen (yes, Steve ****ing McQueen!) has an episode of Small Axe, based on Alex's life. It will be aired on BBC One in earlier December (I believe 6th December) in the UK & Amazon Prime airing in the US a few days later. Not only that, Noel Clarke and his production company, Unstoppable, is adapting Alex's Crongton series for TV and Crongton Knights was adapted for theatres and was receiving huge praise (and then COVID happened and we all know how that and the Governments of the world is affecting the Art Industry...)
Now, before I give you the extract, just going to point you in directions of where you should go. If you want to say hi to Alex, you can go over to this website of alexwheatle.com or pop him a tweet at @brixtonbard! And if you want more info on Cane Warriors, pop over to Andersen Press. And, if those of you curious over Small Axe, I will pop the BBC trailer below and am putting the BBC Media Centre link here for more information:

Louis shook me awake. I opened my eyes and he pressed a broad finger to his lips. He peered out of the window and we could see the tops of the trees dimly lit by the plump

moon. Mosquitoes buzzed around us. ‘Come, mon,’ Louis said. ‘Let we step outside.’

I followed him through the door and we made our way to a tall tree. We sat down, resting our backs against the trunk. The insects in the fields were mighty loud this night.

Strange birds squawked their squawks. Louis looked here and there before he spoke. We heard the distant crunching from the millhouse. ‘Moa,’ Louis started. ‘Your body good?’

‘What do you mean if me body good?’

I swallowed spit, gazed into Louis’ eyes and said, ‘Me body good, mon. Me cyan run as far as me need to and me cyan kill ah white mon. Me nuh have no problem wid dat.’

I did have a problem with that. Could me really kill ah white mon?

‘Dat is what me want to hear,’ said Louis.

Louis checked over his shoulders. No one was about. I guessed there were overseers patrolling near the entrance of the plantation at the bottom of the hill. We couldn’t see

‘Your job,’ Louis said, ‘and Keverton’s job is to kill Misser Donaldson on Sunday night just after de sun drop.’

I didn’t reply. It felt like those big wooden rollers that Papa feeds the cane into were now grinding in my belly. Sweat drowned my face. My pulse banged my temples.

‘Use your billhooks,’ Louis continued. ‘Aim straight for de gut or de chest. Use two hands and dig deep. And then twist it like you’re meking ah fire. Mek sure he don’t breathe one dutty breath again.’

It took me a while to answer. Kill Misser Donaldson? I guessed he might’ve asked me to run somewhere when de bruk- out start. My heart kicked my ribs and didn’t stop.

‘But we have to put dem inna de sack when we finish work,’ I pointed out.

Louis shook his head. ‘Not on Sunday you won’t.’

Sunday was only two dawns away.

Papa would never agree. He would say ‘It’s not worth the agonies that will come to you.’

But Pitmon never raise ah hand or ah fiery tongue to anyone ’til Misser Master trouble him daughter.

And Miss Pam was like ah second mama to everybody but dem just fling her inna de pit after she drop.

Me must lend me good foot and hand to de cause.

‘Who’s going to kill Misser Master?’ I wanted to know.

‘Me will dig Misser Master hole wid me own hands if me have to,’ I said. ‘And fling him inside wid plenty chicken claw.’

‘There will be no time to dig anyting,’ Louis said. ‘We have to forward on quick- time to Fort Haldane. It’s by de blue waters. Tacky say dem have guns there.’

‘Guns?’ I repeated. ‘Dem tings dat fire quick deat’? Me remember me papa talk about it one time.’

‘Me cyan’t sleep now, Louis,’ I said. ‘Me head full of tomorrow’s worries and de day after.’

‘Mine too,’ Louis admitted. ‘Try to empty your head and sleep good.’