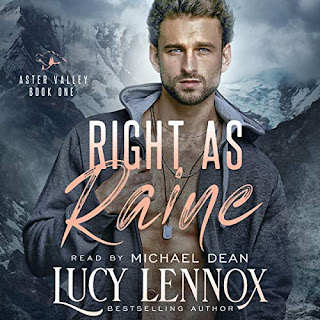 Slow putting my toe into MM romance over the past year or so. But have been a little uncertain over trying new authors in this genre as I discovered that I seem to enjoy romances that have very little to no angst and when trying someone new in a genre you're only just started checking out, it can be very hit and miss. So, when I, on an impulse, bought this audiobook, I wasn't sure if I was going to enjoy the romance/angst or not. IMPULSE BLIND BUY!!!

Tiller is the first openly out American Football player and, when he was first signed, he was forced to hire Mikey (his Coach's son) as a private chef. They both decided to that this situation was only for a short period of time. That was five years ago, and the two have grown to like and respect each other (and have crushes on each other). So when Tiller gets an injury and needs time to recover, Mikey puts his foot down and makes the pair go away to a private cabin in Aster Valley over Christmas.

One night, they cross the line and decide that whatever this is can only happen in Aster Valley. But what happens when the real world comes knocking? And what happens when Mikey's dad find out? Will they call time on their relationship or will they realise there's more to life than American Football?

I did enjoy this, once I found my footing. I did like Mikey and Tiller apart and together. I love the idea of friends to lovers in a holiday bubble situation. No angst here, just them enjoying each other company and then them kissing and making friends with the people in town. The fact that, up to a pop, they talked and respected each other, was a big thing for me. I really liked this chunk of the book.

However, once people outside of Aster Valley began to find out (aka Mikey's Dad - who he has to call Coach [why would you demand your children to call you your job title and not Dad or Father is beyond me? He has a huge power complex]), the angst and angry came in. The fact that we see/are told that Mikey's family are quite neglectful to him is upsetting (I see why this was here - found family troupe are a lovely thing and I did enjoy that Mikey finds his family in Tiller's family and in the residents of Aster Valley), but to have Coach blackmail Mikey to leave so that he'll bench a still-injured Tiller for a game or two and allow Mikey to publish a cookbook with NFL players quotes used angered me. To choose a sport over your child upset me no end. I was waiting for Coach to face some kind of justice or consequence and yet... nothing.

So, I don't deal with angst well. Which probably explains why I am not going anywhere near the second book in the series, Sweet as Honey, as after read the blurb for it and several write-ups, it's not going to work for me. Nope. Not going to go down that rabbit hole.

Speaking of book 2 in the series, can I talk about the epilogue super quick? I agree with everyone else - the epilogue doesn't work. It took away from the "Happily Ever After" we got in the final chapter with Tiller and Mikey. Plus, the epilogue works as a first chapter to the next book in the series, or a taster for the next book (something I don't think anyone wanted). I get why this decision was made to have one half of the couple from next book do the epilogue - teases us to get book 2 and hints of the mystery/angst for the couple yo come - but no. It didn't tease me into getting book two. In fact, it made me decide not to (which is sad as quite intrigued by this coupling [one half more than the other]) , but reading this made me go "Nope" as I don't think I could stand reading from this person's POV. This character lack self-confidence and I have a horrible feeling that the "damsel in distress" troupe will be used HEAVILY and, while I do like the "damsel/saviour" troupe, I want the couple to be equals to each other, not have one save the other constantly due to power complex. 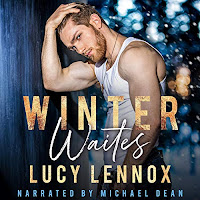 So no to Sweet as Honey. I might consider the third in the series, Hot as Heller, or the prequel novella, Winter Waites, if I do decide to return to this world but that will be much later this year, early next year. Am leaning more towards the novella as the audiobook for that is under 2 and half hours long.
Another thing that did annoy me is that, if you're doing dual narrative on an audiobook, maybe have two narrators as, at times, the voice got muddled and kept going "Wait, who's chapter is this?". I get why (if self-published, funds are tight), but there were one or two choices made with characters's voice that made me wince every now and again. But the narrator, Michael Dean, is well-known and well respected narrator in the MM romance (my first outing with me so excuse me being a newbie) so might be a tad harsh on this front. I, recently, listened to an interview with him on a podcast and it made really interesting listening (link for that is here).

I glad I tried this as I want to read more MM romances, but not 100% certain this author's style is for me. May come back to this series, maybe not. I think I have more exploring in this genre to do before I make my decision.
Posted by Pewter Wolf at 08:00:00