I should be writing my proper full blog post reviews/write-ups on Pewter Wolf reads. But I don't think I can with these two titles that I read earlier this month. So, I decided to do another mini-review post. Plus, these are both books I was gifted via the publisher via NetGalley (in exchange for an honest review/reaction, of course) and as both have LGBTQ+ themes to them, I thought it would be nice to put them together. Plus, I did rate these quite highly on my Goodreads (goodreads.com/pewterwolf) so I think putting them together makes sense. 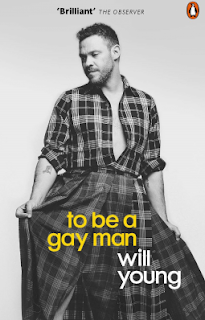 Non-fiction isn't my typical Go-To genre. I dip my toe in every now and again (I adored The Five: The Untold Lives of the Women Killed by Jack the Ripper by Hallie Rubenhold & really enjoyed Dead Famous: An Unexpected History of Celebrity from Bronze Age to Silver Screen by Greg Jenner, and I have one or two on my radar), but when I saw this up on NetGalley and then on my library's audiobook app, I jumped at it for a reason I couldn't put my finger out.

This is surprisingly short - 4 hours on audiobook and 272 pages in UK hardback - so I wasn't expect a deep-dive into the issue of gay shame, but I found that Will talking about it and how it effect him really insightful. From how UK government tackled the AIDS crisis in the 80s (many of us watched Channel 4's It's A Sin and were shocked over what we witnessed) to the casual homophobia we see in newspaper/media outlets via the use of coded language (yes, [CENSORED UK TABLOID NEWSPAPERS WHO HAVE USED CODED LANGUAGE TO HIDE RACISM, SEXISM, HOMOPHOBIA, ETC], we see what you're doing), we see how this affected him (and others) as a young child figuring out who he is and how it affect his adult life, overcoming the external and internal gay shame.

Actually, Will mentioned one or two things that I, as someone who identifies a gay man, went "OH! I do this" or "I think of this!" and it made me pause and look at why.

I know this isn't going to be everyone's cup of tea (like I said earlier, non-fiction isn't my normal go-to genre) but I think this will be an insightful and thoughtful book to use as a starting point to understand homophobia. 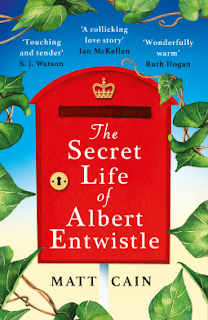 Let's change to fiction and talk about The Secret Life of Albert Entwistle by Matt Cain, a book I simply adore (this won't come as a shock to most of you if you follow me on most of my socials. I talked about this A LOT! Hell, I was one of the book bloggers that revealed the UK cover on social media, mainly Twitter but maybe Instagram])
Albert Entwistle is a 64 year old postman in the north of England. He loves his job, keeps himself to himself and has lived alone since the death of his mother 18 years ago (barring his cat). But when he discovered that he's going to be forced to retire on his 65 birthday (Royal Mail policy), Albert realises that a lonely future awaits him and that terrifies him, making him realises that he's been hiding from life and it's time to be honest with himself and the world about who he is. His first step is to ask for help to find George, his first love...
Have you guys ever had high hopes for an upcoming book and not only did it hit all your expectations but exceeds them? Well, this book was that for me! It was warm, tender, had a slight edge of bittersweet (not much, just an edge) and it was simply wonderful. Heartwarmingly wonderful.
Now, writing 5 star reviews are hard as I would gush non-stop about Albert and his growth as a character (him coming to terms with who he is, him slowly beginning to have friends, his search for George, his growth with his self-confidence and self-worth). I could easily talk about his friendship with Nicole, a single twenty-something mum who lives on his route, as their friendship was delightful.
I loved this book, and that makes writing this review a bit of a pain (writing positive reviews usually are. I like to have one or two things I can go "However" over). But, yes, a wonderfully endearing read.
Out of the two I mentioned above, I think I would recommend Albert Entwistle over To Be A Gay Man. This book was just a joy to read and much more up my street. However, I do think To Be A Gay Man was an insightful read.
Posted by Pewter Wolf at 08:00:00